The scorn of Kitten Magee 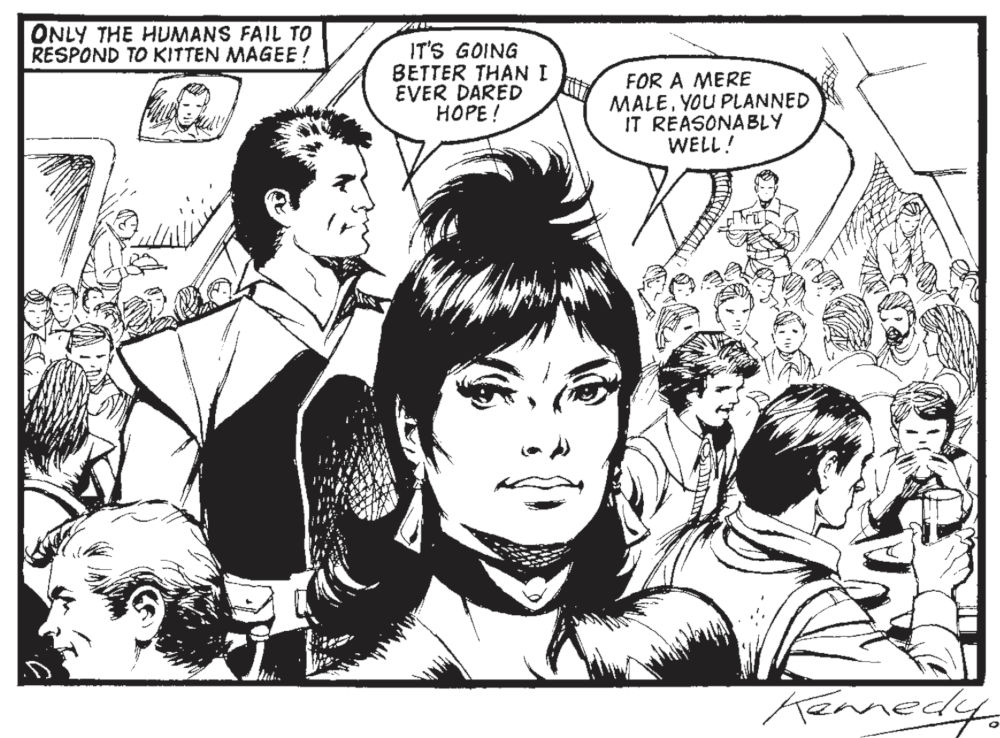 Not long after I sighed at the things Rebellion was doing with those vintage British comics properties it acquired by buying half of the old Fleetway catalogue, it bought almost the entire other half. Some of the new batch surely can’t be pushed into another shotgun wedding with 2000AD, so perhaps the versatile archival approach that hasn’t really materialised yet will now develop. Whether having one company, however conscientious, own such a swathe of UK print culture is another question.

The latest item to re-emerge after the previous deal is a character from Wildcat, a brief 1989 comic that tried to set up a sci-fi anthology format with one envious eye no doubt on 2000AD but didn’t pull it off. Turbo Jones is too generically starship-captain-heroic, James T Kirk without the charisma, to stand out from the crowd, and the lack of satirical bite in the strip bearing his name leaves the space-opera looking prosaically right-on. Why Rebellion opted for this straight-arrow when it could instead have gone for his colleague, the scornful Amazon feminist Kitten Magee, is a mystery. So too is the emphasis given in the trade dress and introduction to the contribution of Ian Kennedy, who draws a perfectly fine 12 pages, rather than the Spanish artist(s) Vanyo, who draws more than 100 and characterised the strip for its entire span. Proper compensation for old comics work is an eternally vexed issue, one directly relevant to the mountain of archival material now piled up in the Rebellion warehouse, so it’s hard to judge what the emphasis here might be implying, if anything.

I reviewed Turbo Jones for Tripwire, along with the latest reprint of Zombo from 2000AD, Al Ewing and Henry Flint’s wildly excessive and offensive splatter comedy in which a character called Kitten Magee would have fitted right in.

Suspiria, The Girl in the Spiders Web Before everyone saw Luca Guadagnino’s new version of Suspiria he was professing his love of the old one to the point where it seemed he might turn