A good pastiche should just keep going when you get to the end of the runway. Goldtiger arrives as a mock Swinging Sixties newspaper strip about Lily Gold and Jack Tiger, an oversexed dynamic duo not a million miles from Modesty Blaise banging Jason King, who wander into a spy plot rescued from Ian Fleming’s wastepaper bin while most of their clothes fall off. Then the second half takes a turn for the meta, when the strip’s artist gets the hump with his editors and starts playing God in the story—which of course he already was anyway. He intervenes in the strip personally, unplugging the supervillain’s death machine and eventually pressed against the open side of the final panels like a mime in a glass box. The strip’s opening three words are “Nice and smooth,” a signal flare to fans of Grant Morrison about what’s up before the first panel is over, after which Guy Adams and the artist known as Jimmy Broxton garnish their fandango with made-up 1970s magazines called things like Ausflippen and psychedelic albums by one Zack Frappa. Their final pretence is that the swinging duo nearly wound up in 2000AD, a joke you would guess was added after Rebellion picked up Goldtiger from its original self-publishing path.

Now 2000AD has published Adams and Broxton’s new strip Hope, which also plays games with history, and again on a path which is fairly well-worn, the one where magic and sorcery are part of the post-war Hollywood norm. Occult noir is an evergreen comics genre that has kept John Constantine in business for years, and might be even stronger in cinema—everyone’s come around to Angel Heart but Clive Barker’s Lord of Illusions still awaits its due—and although Hope is less ambitious than all those, and less ambitious than Goldtiger really, the strip’s shadowy style and wan ink washes and runes snaking over the page like smog makes for an effectively pungent atmosphere, somewhere adjacent to a 1980s Warren comic. I read the collected first story arc, the one called Hope…For The Future, and reviewed it for Tripwire. 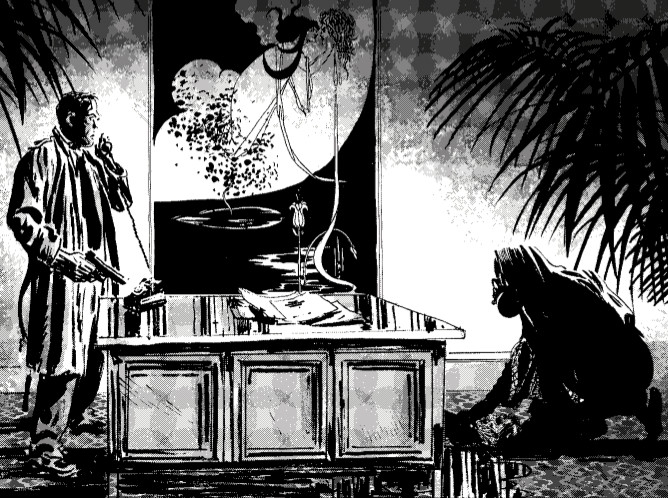 Dan Brereton I was late to Dan Brereton’s comics, thinking that his Nocturnals series two decades ago was a straightforward horror comic. In fact it was Charles

First Reformed, Pin Cushion Paul Schrader’s last couple of films involved Nicolas Cage shouting and as it happens I preferred the one that Schrader vehemently disowned, but in