In the April print issue of Sight & Sound some cross words about Bad Boys for Life, a franchise emerging from the freezer after 17 years to chance its arm at the tables just because the tables are still there. Michael Bay started the Bad Boys machine and was immediately not the answer to any question I personally was asking, and two decades later 6 Underground on Netflix looks like him settling a few old scores with everyone who told him to tone the excess down a bit. But at least excess is an option if you start from where he started. Bad Boys 3, just like Rambo: Last Blood, is so boxed in by obligatory pop-culture messaging that it can’t even become excessive. Or match the spirit of its own original film, since irony now strangles everything from the Cinema of Cartoon Cruelty before it even gets going. Meanwhile the myth of redemptive violence trundles endlessly on, in this case allowing two generations of males to find redemption by cartoonishly obliterating a devil woman from both their lives. The film is, of course, a smash.

No one will ever know if 6 Underground is a smash, since its viewing figures are just data etched into a memory crystal somewhere in the Netflix AI; but it makes Bad Boys 3 look like a wheezing grandpa halfway towards a personal best marathon time of ten hours. As Robert Hughes said about art and Tucker Stone said about these very explosions, the distinction to be made is whether any cultural doodad wants to supply its audience with information or with experience. Superhero films collapse under the tonnage of constant information, while 6 Underground junks the stuff in favour of colour-saturated cross-cut velocity, marshalled apparently by PT Barnum on a bender. This idea has flickered around before, but when something like Crank or Gamer had a go at it they were stuck with being grungy lo-fi farce, which was all that the digital workflows could conjure at the time. Plus they were strenuously masculine, and any commentary on 6 Underground needs to discuss how Bay deploys the least macho bunch of males he has ever bothered with, and two distinctly un-paper-doll females; coitus has never been more interruptus in a Bay film before. Freed to go bonkers by Netflix’s open chequebook—and by some customised RED digital cameras apparently built to specs yelled down the phone by Bay himself—6 Underground is also freed from being lo-fi anything. It’s the first full-on accelerationist thing of the Twenties, the raw materials of a heist film getting smashed together by the Large Hadron Collider.

Seemingly somewhere off in another dimension sits A Hidden Life, a major result from the research lab where Terrence Malick has been wondering what a cinema of expressionism might actually look like, and seeing what happens if you bet the house on romanticism rather than reality. Having already pondered how to handle questions of personal faith and regret in other films, Malick finally tackles the Nazis head-on, spotting immediately that the only meaningful way to do so is through questions of personal faith and regret. The director’s oscillating low-level camera has driven some viewers up the wall for years, but anyone inclined to think that he’s been getting under the skin of his characters that way might find that he’s now even closer to the poetry of earth than ever, by connecting it to the humans rising out of that clay in the first place.

You might have to note that Malick can’t actually do anything much with the Nazis themselves, who turn into the usual gurning dingbats when regarded by that fish-eye lens from somewhere around floor level. One of them is glimpsed screaming in his own office, presumably tormented beyond words; Waldemar Kobus from Black Book and many other places does a little jig of amusement, presumably not tormented at all. But they aren’t the point; and neither is Hitler, whose voice echoes across the Austrian landscape at dusk, possibly not a strictly necessary metaphor. The point is the man they are all escorting into the cosmos at the business end of a death warrant, and the potency of a film in which he does the difficult thing because it’s the right thing but not the violent thing can hardly be underestimated in a system where Messrs. Smith and Stallone take out the trash in a moral vacuum of cod xenophobic panic. The film criticism nonsense klaxon went off when someone complained that the film failed to show why Franz Jägerstätter would resist the order to read out a Nazi oath and effectively throw his life away; and it’s true that Malick neglects to show Jägerstätter discussing the lives of the saints out loud or making a helpful speech about his situation to one of his sheep. Instead he’s just shown as being in touch with his Christianity and his own place within it, depicted that way through the manner in which he looks at his neighbours and his mother and his church and his wife and children stood next to it. From there, what other decision could he reach? 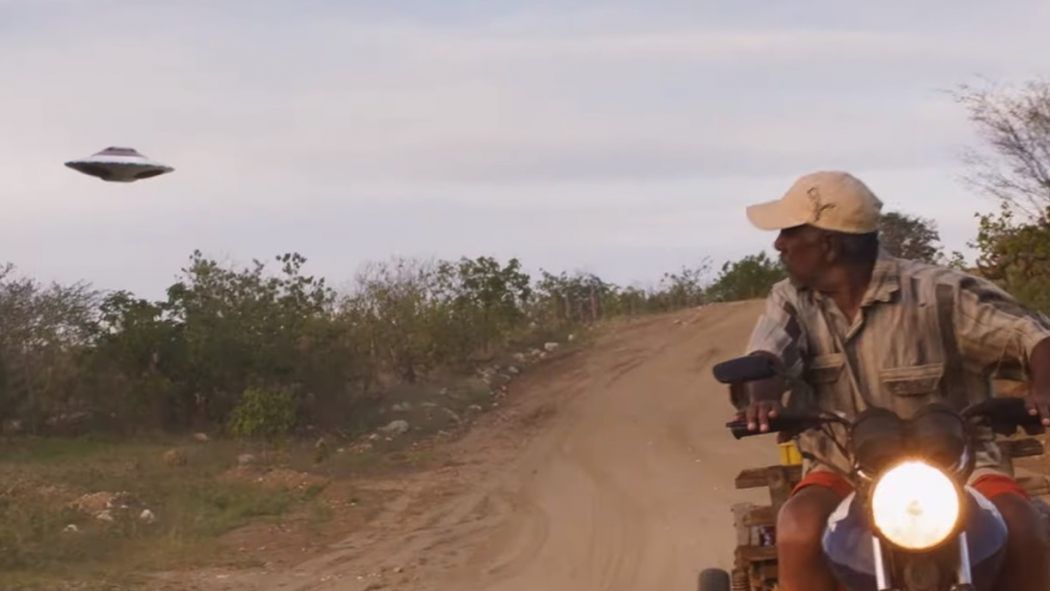 Bacurau bubbles like a shaman’s stew, an authentic Weird Western with the subversive nerve to mix anti-colonial absurdism and pro-John Carpenter pastiche, the nerve that the WW label implies but doesn’t always deliver. Explaining almost nothing while making your meaning very clear is a neat trick, as is writing something where almost every event has something to satirically signal about politics, violence, prejudice, Europe, Hollywood, the climate, small town life and the big bad world.

Mitchum, So Long Silver Screen, LAAB For The Comics Journal a review of Mitchum, a new edition of the French anthology by Christian “Blutch” Hincker which arrives now pretty much like a