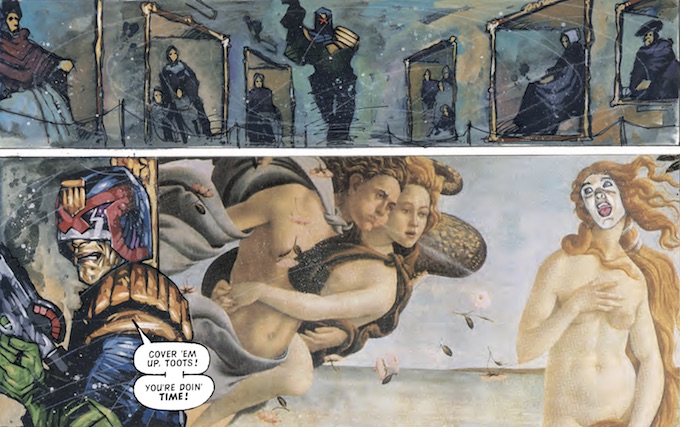 All three recent books about the birth of 2000AD point out that MACH 1 was a blatant attempt to make readers think of The Six Million Dollar Man, but since Enio Legisamòn put a very Lee Majors-ish face on the character for page one it was hardly a state secret to anyone reading on the school playground at the time. From four decades down the time tunnel, MACH 1 might be more successful at the comic’s two stated aims — cash in on sci-fi while alarming old British adventure comics as much as possible — than most of the other stuff in Prog 1, just by being such an enthusiastic cash-in itself. Rebellion has collected the first year or so in a new volume, where the constant churn of artists and writers doesn’t do as much damage as I remembered — partly since I had forgotten that the strip is utterly nuts. It’s boys adventure comics for boys delirious with fever, or dreaming of receiving six hundred pounds worth of cybernetics from some branch of the Callaghan government and marrying Farrah Fawcett. I reviewed the collection for Tripwire.

Also at the same venue: a review of the latest Judge Dredd Case Files collection which covers 1999 into 2000, and by my sums might be the last to contain stories only published by Fleetway before Rebellion swung in through the window on ropes. Those books mentioned above make it clear that a lot of creators felt the period before that happened was desultory, and of course they should know. But Dredd has always occupied his own tonal niche isolated from properly wayward editorial whims, a niche shaped very much like writer John Wagner. (Dredd’s counterpart, Psi-Judge Cassandra Anderson, had the luxury of taking months or years off here and there, and her stories over the same period in the hands of Alan Grant were properly ambitious.) Dredd gets back into humorous mode a few times here, but the book includes Wagner and Henry Flint’s story from March 2000 in which the residents of a city tower block respond to their unsafe building and uncaring politicians by committing enthusiastic mass suicide, which in a current light is practically Swiftian. You would need to be sure of your critical footing to say that a period which put that on the shelves of WHSmith had failed to do its cultural duty.

Vision things A mention for some science stories I had a hand in recently. Implants to aid people with eye diseases come in different varieties, but clinical