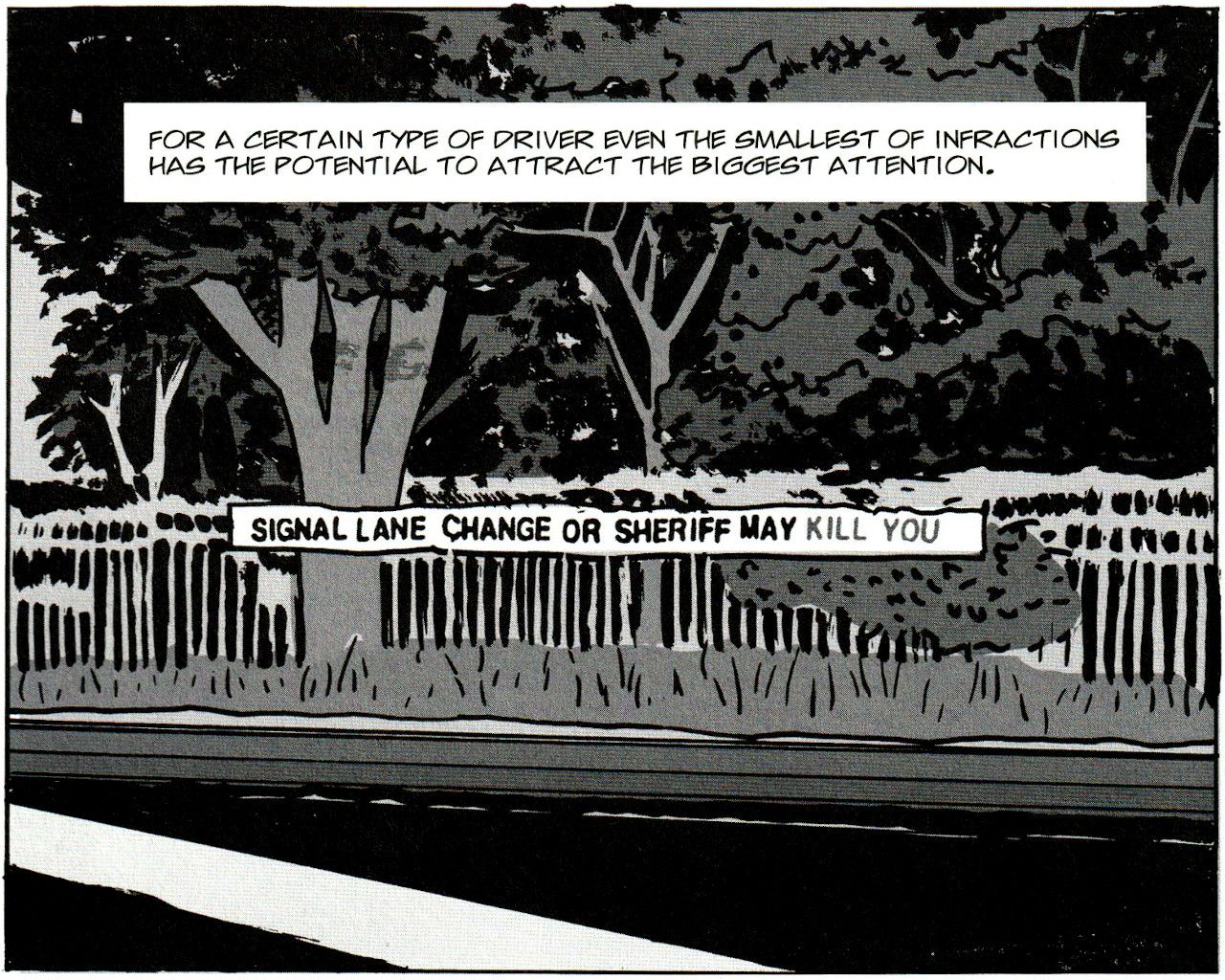 For The Comics Journal a review of Crash Course, a righteous and angry activist comic by Woodrow Phoenix which starts off being about bad driving and road rage before taking on some of the most toxic social and law-enforcement fault lines of the moment.

It’s also a solid artistic response to dismay, having been a much shorter book 12 years ago about the first set of those problems which Phoenix has now waded back into in order to process the dire provocations of the second set. It puts anguished narrative captions over drawings of roads from which all signs of cars and humans are absent, with the occasional visual metaphor added for spice; and there is a discussion available about how successfully that works as comics, where the art might not have to serve a wider sequential purpose all the time but has to address that requirement in some form. There might be another discussion about how far the method’s radical intentions stretch in practice. The first things I thought of while reading it were films, the visuals of Patrick Keiller’s laconic Robinson semi-documentaries and the grainy views of the A4 heading west in Radio On; art that’s less urgent than this but maybe more pungent. Art about deserted roads now puts Covid-19 on the reader’s mind as well, a dimension Phoenix could hardly have seen coming. But it’s a hallmark of strong art to be in the right thematic place at the right thematic time to connect with something else entirely.

Infamous public domain comics hedonist Octobriana rides again, still all boobs and bazookas, although since this time it’s Jim Rugg at the controls this probably counts as her highest profile outing in a while. Rugg is a mechanic, keen to dismantle whatever car engine he’s interested in to see if he can put some new cogs back inside, and he’s probably happier doing that than embracing the boobs and bazookas bits of Octobriana lore. Which makes his Mtsyry Octobriana comic hugely kinetic and printed with UV-active inks and looking affectionately over its shoulder back at her first 1970s appearance, but maybe also accounts for why the comic doesn’t fancy tapping into her underground and subversive aspects—allowing for the chance that Rugg intends 26 pages of ballistic mayhem from an Amazon in tight snakeskin pants to be inherently underground by nature. Which, well, maybe, but Spain Rodriguez is regrettably not around any longer to wade into that argument. Mtsyry Octobriana is, in any case, an artifact from an artisan and an addition to Octobriana lore, and I’m all in favour of all of those. I reviewed it for The Comics Journal here.

Judge Dredd America, Perramus For Tripwire some words about the latest reissue of Judge Dredd: America, the thirty-year-old story that’s become its own cottage industry; the most