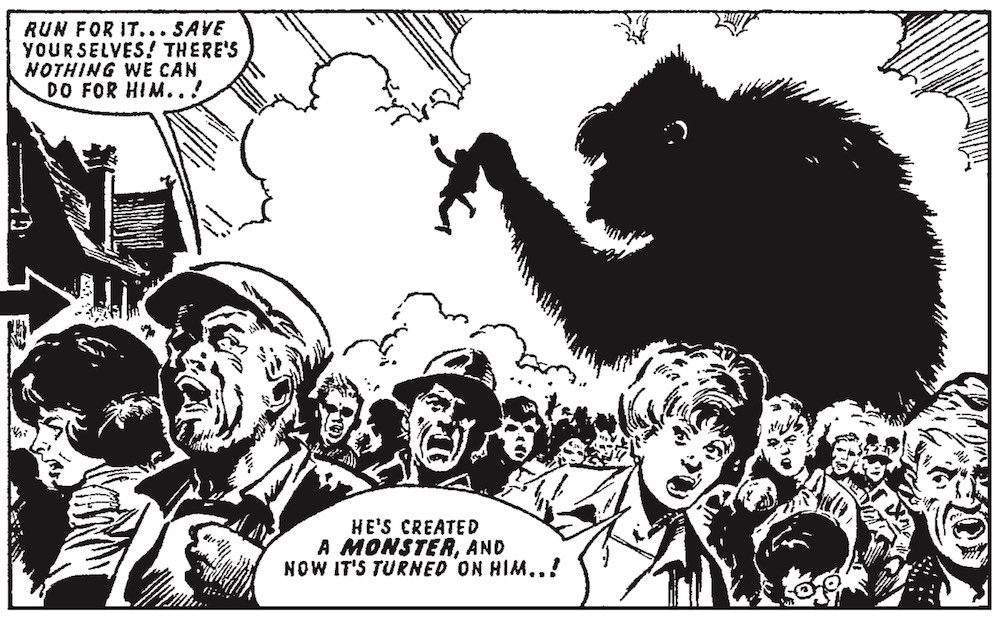 Rebellion didn’t say how much it spent buying up the output of the old IPC Youth Group and having half of the UK’s entire comics output for the 1970s and 1980s delivered into its warehouse in tankers, but presumably it was not chicken feed. The publishers did say up-front two years ago that the plan was for new stories with the old characters, ie. an active return on the investment, which now turns out to be reworkings of them into something more in the current superhero vein by active 2000AD creators, and a connected universe for everyone to rub shoulders in. You don’t have to be too averse to nostalgia to wish that this wasn’t quite so inevitable. The reprint programme has already shown to at least one reader that the frantic brevity and excess exposition inherent in the UK’s old weekly anthology format do not necessarily make the best impression, when the strips are gathered into large sequential runs and the stories’ end-points recede endlessly away from you towards the horizon. The stand-outs so far are probably the calmer material from Misty and The Beatles Story reprinted from Look-In, which are self-contained and neither hectic nor lunatic; but for the boys comics stuff it’s not the easiest task to see exactly which audience is being fostered here, beyond the literal appeal to people who were reading 2000AD in 1977 plus those who wish they had been. Finding a way to treat the loopier old stuff as cultural works rather than IP fodder might be a better destiny for it. Or at least consider making a break from the standard vein of 2000AD, which seems entirely predicated on nostalgia already. But all this is easier to say if you’re not the one signing the cheques at Rebellion.

In any case, the original version of Herr Doktor Von Hoffman, embittered old Nazi and maddest of mad scientists, has had his original adventures reprinted in a collection called Von Hoffman’s Invasion that I reviewed for Tripwire. No coincidence that his attempt to bring fictional 1971 Britain to its knees allowed a real-world 1971 boys comic to address a painful grievance, involving the World Cup and the West Germany football team. Also for Tripwire, a collection of Judge Dredd stories involving apes, mostly as adversaries although lately one of them as an ally. Science-fiction loves a good primate, and in 2000AD they always feel like one of the few strong ties between the black satire of the Dredd strip and the whimsy of Silver Age DC Comics, territory that 2000AD usually treats as a hinterland of no major interest. 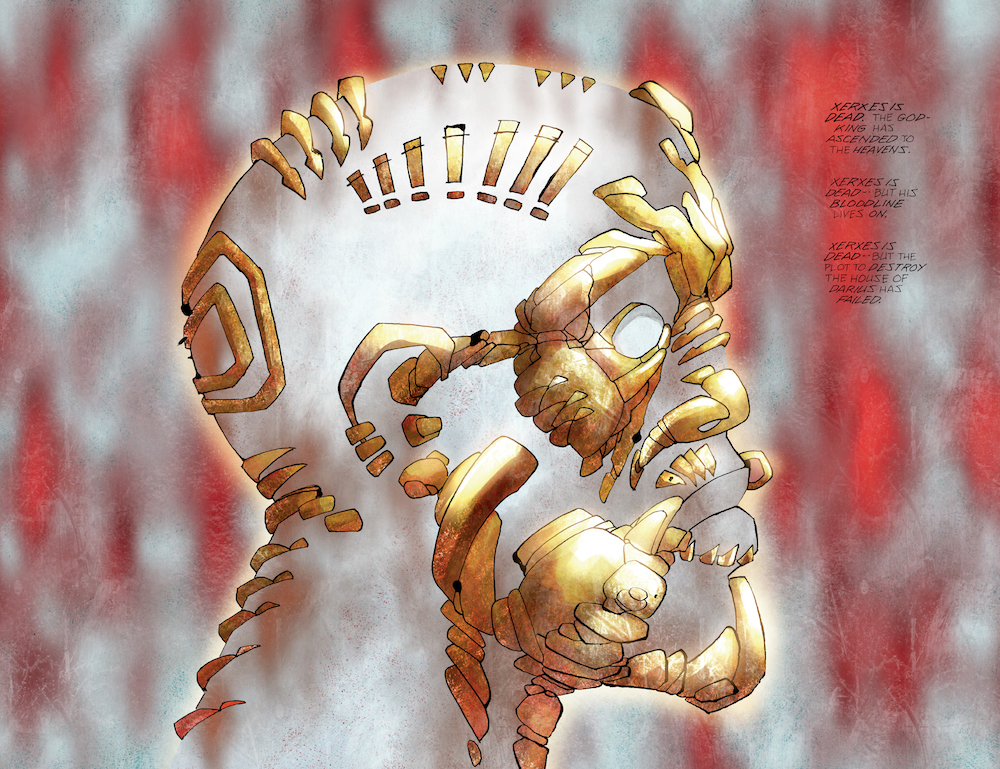 Frank Miller’s position in the comics culture these days is a hinterland all his own, and the conclusion of Xerxes from Dark Horse Comics has caused even less of a ripple than its launch, which itself did not look like much. At the time of writing, no one’s even bothered to put it on Wikipedia. There’s a contingent of readers who will never forgive Miller for Holy Terror or his bellicose statements about the book or his other statements about the activist left after 2008, and some of them had only just forgiven him for The Dark Knight Strikes Again anyway. Another sector remains sure that the man’s linework reveals hidden wickedness before the ink is even dry, a plank of current leftist thinking about art that I’ve pondered at length before always giving it the boot. Most reviews of Xerxes seemed determined to just parse the plot and skirt around the issue of the art altogether, as if worn out by the effort of looking at Miller’s sinuous, boneless DC superheroes last year on the covers of The Dark Knight III: The Master Race. Exhaustion might actually be the default response to reading Miller now. But some of the cartooning in Xerxes is as bracing to look at as anything off the presses this year.

In theory Xerxes: The Fall of the House of Darius and the Rise of Alexander—a title which you guess Dark Horse marketing had little say over—is part-prequel and part-sequel to 300, although the plot is more of a loose improvisation than a history lesson. Several generations of Persian kings are thwarted by internecine conflicts within their own house, and by resourceful Greeks putting aside their own fractious disagreements to foster a democratic project that looks like it could go either way. Xerxes shows every sign of becoming a despot, but more than once the real focus seems to be on unreliable hearsays and what you would have to call fake news, the accumulation of legend and lies onto fact like layers of dust until the roots are hard to discern.

Meanwhile the art has changed from 300’s bronze-wash firelight into something properly rococo, human bodies embossed with ornamentation that almost floats above the page. Miller’s current colourist, Alex Sinclair, was tarred by some of the general unhappiness with The Master Race, but in Xerxes the high-contrast palette seems completely in tune with Miller’s wish for heft and mass, legend and fate. He also makes some Persian flesh jet black, opening more avenues of interpretation, factual and otherwise, and shunting the cartooning even closer to iconography. It can’t be as simple as saying that all this is just Miller hacking further into the undergrowth of expressionism, but that’s surely a big part of it. Expressionist figures ask for pity, as Robert Hughes once wrote on the topic of Francis Bacon, and the strong kings of Xerxes, drawn as terrible old gods of the past, dead and bent double in their holes in the ground or slumped dying on their thrones, are pitiable in vastly larger ways than Superman was when Miller gave him wrinkly leggings and a neck wider than his head.

News that Miller has recovered the film and television rights to Sin City from the smoking crater where The Weinstein Company once stood probably doesn’t bring that work much nearer to a live-action return—tough to imagine a studio green-lighting Sin City Anything at present—although if it means that Miller is emerging above the horizon again, so be it. “Frank Miller remains the best argument against conformity, complicity and self-conscious prudery in movies made from comics, simply by proving that the two forms will forever fly apart like magnets,” said me about the last Sin City film, but then I’m also the guy who did not hate The Spirit, and from a few years further down the track that film looks more like an authentic reflection of its maker at that moment than it even did then, all his conflicted intentions out in plain sight, pleasing hardly anyone and possibly not even him. At this point, with the calamity of Holy Terror still looming over Miller’s every pen stroke like a thundercloud, the five issues of Xerxes feel more assured in their cartooning, more drastic in their methods, than any two-decades of British comics combined. It’s a product of cultural wartime, saturated with artistic tensions, which sprints straight past the fragile nostalgia of Rebellion’s Treasury project and roars off into the future.