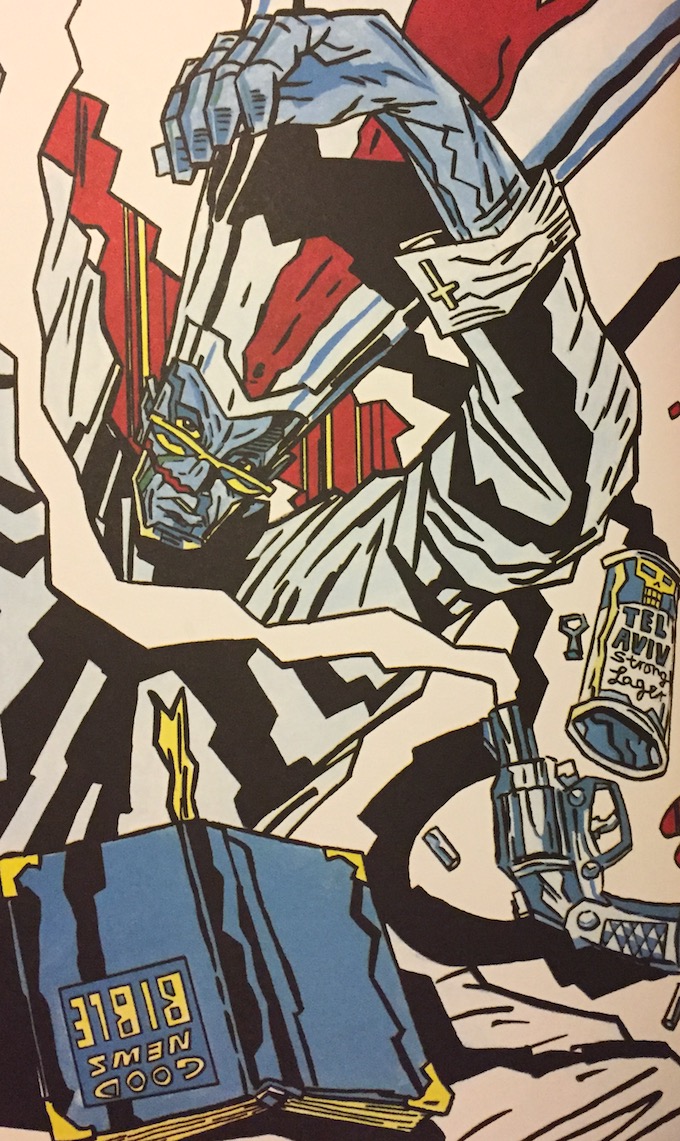 For Tripwire I read Brink Book One, Dan Abnett and INJ Culbard’s sci-fi crime story now collected from 2000AD, which dresses an old-fashioned 1980s style police procedural in very modern blazing colour fields with art that owes a good deal to animation. Brightly lighted noir is an under-explored arena compared to the dark and shadowy version, although Abnett opts to underplay the political dimension and element of class conflict to the point where they could almost be optional extras — but most certainly are not.

Abnett also writes 2000AD‘s Grey Area, where issues of migration and cultural prejudice aren’t subtext so much as simply text. But outside of the strips written by Pat Mills — who still hasn’t met a status quo well worth overturning — the comic’s revolutionary instincts have to fit within distinctly mainstream borders these days, and the occasional suggestion from the editorial office that 2000AD still gets all up in The Man’s grill like it’s 1977 are a bit quaint. I recently devoured IDW’s Artisan Edition of Wally Wood’s EC Comics stories, collecting the original pencil art straight from the artist’s boards, and the social stresses of late Fair Deal America and convulsions of the Korean War bubble under every brush stroke of Wood’s sci-fi artwork in ways that its distant descendants in modern 2000AD can’t really emulate. The distinction is even more stark in the war comics created by Wood with Harvey Kurtzman. I had never read Atom Bomb! from 1953’s Two-Fisted Tales #33 before, with its negative-space US-borne apocalypse arriving on page one and a deliberately ambiguous happy ending on page seven that’s so fragile and conflicted the ink still seems wet, but it’s hard to see how a modern culture drenched in irony can possibly approach Thanatos in the same way today.

The trick is to find a different way, and for that there’s Good News Bible, a titanic collection of strips by Shaky Kane from old issues of Deadline so densely personal that it arrives on the page direct from the artist’s laboratory without exposure to the outside air at all. Kane’s recent work has corralled his Kirby-ish power within workable frames and tangible lines, channeling something of EC Comics’ sci-fi intensity, but these old Deadline strips are messy and unruly and quite a handful, the jagged lines generating something close to tangible static charge. David Hine, Kane’s recent collaborator, told The Comics Journal that “the best works of art always leave things unresolved,” and Good News Bible is chimeric in ways that can only come from authentic artistic inspiration and its messy scars, not the blunt calculations of your average savage pencil. Plus Deadline had its own Last Days Of Thatcher axes to grind — “gazing into the abyss that was 1989” says the new frontispiece — and Kane’s strips about the puritanical A-Men, licensed to kick your door in and order you to cease fornicating on the authority of Chief Constable James Anderton’s Turin-style death shroud, are rendered in thick pools of black that you stare into like a suddenly dark room after the lights go out. Then the later strips leave narrative behind, turning to montage and cut-ups and typography, fraught personal investigations of frustration and self-image with which the reader just has to reach an accommodation on whatever terms can be agreed. Throughout, men of principle find those principles to be fragile and riven with fault lines, and often end up slumped against the wall in a characteristic pose. Since not the least bit of knowledge I acquired in connection with the book is that James Anderton is actually still around, Kane’s thumping pencils and their vertiginous density have a suitably modern resonance in an era when honest ambiguity has gone horribly out of fashion. Dannii Minogue is still around too, her Home and Away-era cultural presence having been tipped into Kane’s artistic blender to emerge on these pages once or twice. If the entirely gracious response from her at the time and included here is above board, the younger Minogue has a sense for the tides of underground cartooning much as her sister reads the course of haute couture.