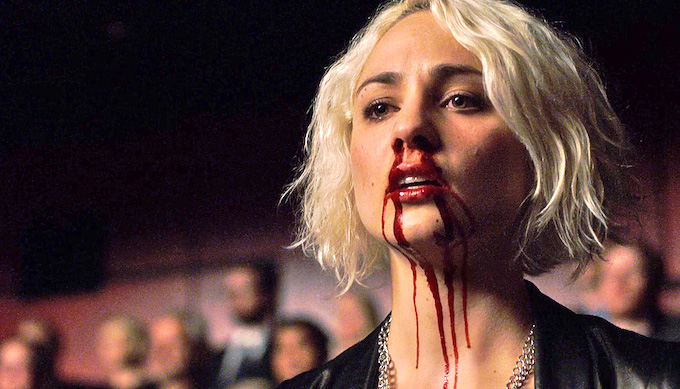 My votes in the annual Sight & Sound Films Of The Year poll were for:

One of these received double-figures votes, so by last year’s standards I swerved into the warm currents of the mainstream.

In the comment box some matters arising, in a year when more matters arose than usual:

Time spent arguing about whether Twin Peaks counts as a film or not while all the crockery falls off the shelves around us seems like time thrown into the abyss, but film critics’ modern dust-ups are all the same argument, the one about relevance and audience. Film critics habitually produce a thing called a Best Films Of 2017 list which a general public cannot interact with in the same way as a Best Books or Music or Art or Theatre or Poetry of 2017 list, a voluntary irrelevance which I have never pretended to understand, but the additional difficulties posed by Twin Peaks should now just be ignored altogether. The audience is anyone finding an artistic thing wherever they find it; the relevance will have to be conferred on our mighty words by them, since we have a habit of forgetting that their interaction with art outranks ours.

Film criticism still doesn’t really know what to do with TV or TV criticism, and vice versa, since one of those trades came to terms with talking about a mass-market consumable art form a long time ago, and the other clung doggedly to the idea that mass-market consumables are exactly what mainstream films were not. Twin Peaks sailed forth on a medium which has left the notion of gatekeepers far behind, and out into a culture which doesn’t know what it wants arts criticism to do other than repeat platitudes. It’s still possible — just — to think of Silence or mother! as works where critics could moderate a functioning cultural conversation and legitimately call that conversation part of the work’s effect, but the idea that Twin Peaks needed a gatekeeper to tell you what was up seemed nuts before the end of the first episode. Twin Peaks was so singular that there was only ever you and it, looking each other squarely in the eye in the quiet of your own home, and the same would have been true if by some miracle it had beamed in via BBC2, and arrived notionally for free. On that level at least, the otherwise pretty threadbare analogy between the show and experimental gallery art was on the money.

Any conversation about Twin Peaks is inherently a step forward for those of us who tried to start one about the empathies and ecstasies of Sense8 a year ago, and any conversation about form rather than content is a valuable advance, even under duress. Reluctance to talk about form has long since stopped looking like a blind-spot and become unhappily tinged with simple snobbery against things which are Not Films. It also happens to suit the ascendant lefist wish that the content of people’s words should be all that’s needed to reveal their hidden wickedness, and the form in which they say them reveal nothing at all. Attacks on Blade Runner 2049 and mother! suggesting that sexual images were present because the actual films themselves were sexist were at least better than not talking about the images at all, but the implication that mass-market art is obliged to write a prescription rather than invite you to register your own flaws is a censorship I was inoculated against at birth. Not coincidentally, a new porn-panic has nearly kicked off twice already — one (male) actor I like was heard saying that Harvey Weinstein became the man he was because top-shelf pornography magazines still exist, apparently with a straight face. Once porn gets indicted again, we’ll have to hold on to our hats.

“The idea of art as a mirror, rather than a prescription or a lie detector test.” Critics telling people that they are doing films wrong is just the worst look in the world, and that’s before we even get properly stuck in to the arena of weeding out the existing art now made suspect by the names of the men in the credits. Retreating from the Twin Peaks ruckus into my CD collection, the electricity available to you in music and the benefits-at-a-distance you get from listening to it were even more obvious than the ones involved in The Best Films of 2017, but just as unlikely to automatically align with your morals-o-meter. (“I don’t listen to music to be civilised” - Alex Ross, and he was talking about Beethoven.) If we’re going to expand the current police operation beyond the artists who are outright monsters and start rounding up the ones who were temperamental man-children taking out their frustrations on women, then there won’t be a bonfire big enough for all the albums that you’ll be wanting to burn. Ike Turner was a thug to Tina while Phil Spector is crazier than a snake in a sack and shot a woman in the mouth, but I’m not giving up River Deep — Mountain High because the thing they helped create made me an incrementally better person for 3:40 the first time I heard it and has repeated the trick from one end of my life to the other. I’m not sure what arts criticism is supposed to be for, if not to talk about that.