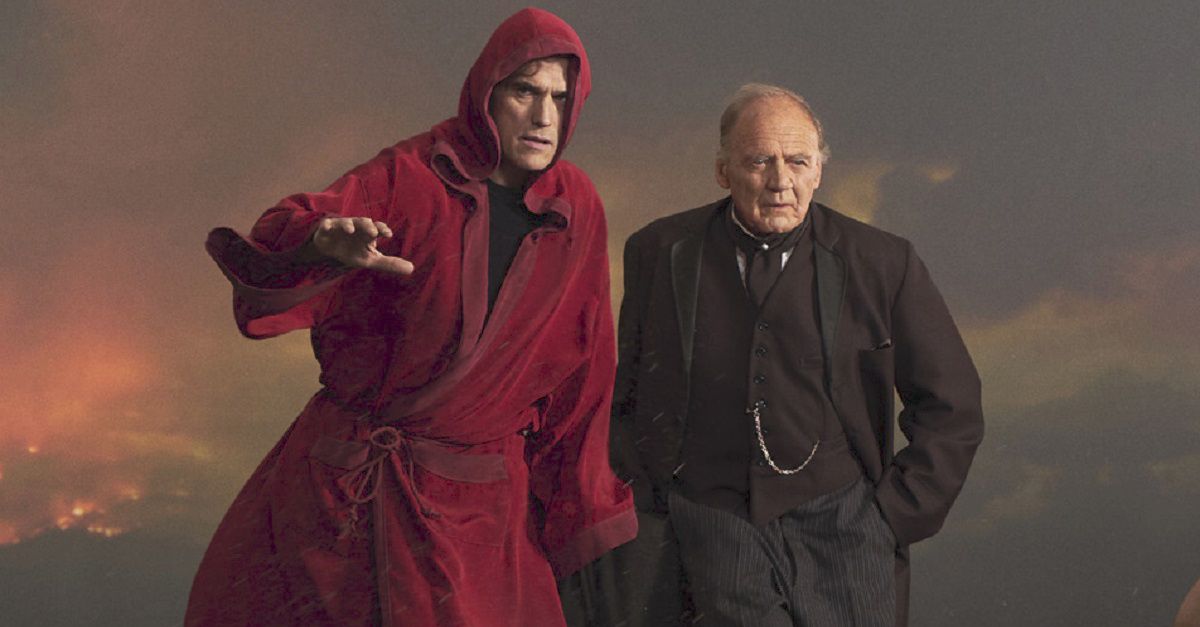 Bruno Ganz gone, the old devil. The House That Jack Built ends with two characters descending into hell, an exercise which looks like it involved Lars von Trier getting the ever-game 75-year-old Ganz to go caving somewhere under Trollhättan. As ever, von Trier’s personal anguish is lensed outwards in all directions on both sides of the camera.

My complaint, again and still, is that art which evades the nature of the evil it depicts and is satisfied with just the experiences of the victims has chickened out of the hard choices. And a culture which can face endless female victims but can’t look male killers in the eye has some problems in the self-diagnosis department, and has neutered one of the purposes of art existing in the first place. The pair of 2018 films about Anders Breivik and the Utøya murders were exemplary, one turning its disinterest in the killer into a formal tactic, the other making him a chilly screen presence in the Hannibal Lector mode, distanced by all the conventions of screen super-villainy. Whether either of these count as the high road towards something unspeakable or no road towards it at all is a chewy question. Something similar hampers Amazon’s Jack Ryan series, a show which proves again that the thriller template with all its logical cause and effect has become useless at understanding human violence in an age saturated with irony. Only something that brings the scent of psychic hysteria in through the window with it can get the job done.

While saying so for Sight & Sound I was thinking of David Lynch, but Lars von Trier has now chipped in. Whether travesty is strictly the right word for The House That Jack Built, it does imply the black mania of the film, in which von Trier turns his wayward gaze back to men rather than women. Wretched to watch, a satire as despairing as anything by Hieronymus Bosch, its transgressive credentials are impeccable from the second murder, when Matt Dillon’s serial killer Jack drags the body of a sympathetic plain middle aged lady away behind his car while the cop suspicious of him is still looking right at them through the window.

Von Trier predictably comes down on this material from the stratosphere with the descending arc of a cruise missile, and although the film makes it clear that Jack kills men as well as women and mutilates small animals, the gendering of the controversy is inevitable. Jack tries faking empathy in the mirror, an exercise which makes him look like a man battling the palsy. He then defiles the corpse of a young child to give it a travesty of the smile he barely managed himself; the second event is a dire violation, but it exists because of the first. He runs over an old lady with a van for no reason. He sets about killing half a dozen hysterical tied-up nobodies with one bullet. He builds a playhouse out of corpses, a sight which might have sent Bosch back to the drawing board. He does things to Riley Keough which explicitly conjure up Bret Easton Ellis, and once you look for allusions to American Psycho they’re everywhere. Jack’s desperate and unsuccessful attempts to confess and get caught, at one point yelling his guilt out of the window, are pretty clear parallels; so is the slapstick bit where he carries a body out past occupied but oblivious apartments, and then carries it back in again. And Ellis really comes to mind now when confronted with dispiriting nonsense like those critics opting to walk out of this film’s Cannes screening and turning the act into a public service, proscribing a film on sale at a trade show and which wasn’t yet even at large in the culture in the first place.

The dire howl of American Psycho still echoes through the canyons, matched by the one from Norman Mailer’s titanic review of the book for Vanity Fair. Mailer’s complaint was that Ellis didn’t connect his travesty with the fictional person committing it strongly enough for the intended thesis to hold, although the terror involved in that disconnection was clearly part of Ellis’s intention. And it’s not disconnected anyway. The book is about snobbery and money being bad news for the moral compass, and if no obvious parallel motivations turn up in The House That Jack Built, it’s because von Trier wants his killer to be a void, empty of motivation beyond the vaguest shadows of childhood anguish.

“The mundane activity and the supersensational are required to meet,” said Mailer; but von Trier has never agreed. Ellis’s capitalism can be fixed, maybe, but at least it has causes and effects, which is more than Jack’s psychosis seems to have. (My point in Sight & Sound was that the engine in David Lynch’s universe is ultimately love; needless to say von Trier’s is the mirror image.) You could argue that this damages von Trier’s films as art, and perhaps be right. You could equally argue that right here, right now, a film about a man who gets away with everything without being caught and despite being desperate to be caught, a man whose irrational unstoppable hatred of women arrives without the support of capitalist avarice, might be going about its legitimate artistic business. And might be not all that far from the spirit of American Psycho, modified into an even more depressing answer than Ellis’s to suit these ironic times.

Buried savageries we do not wish to meet again in ourselves stir uneasily in the tombs to which we have consigned them. We cannot go out on such a trip unless we believe we will end up knowing more about extreme acts of violence, know a little more, that is, of the real inner life of the murderer.

The issue here is whether depiction of someone crawling across the world without that real inner life—a case where there is actually no there, there—is accurate, or inaccurate, or artistic, or just naive. But by saying it about male madness at all, and today, the film might be speaking actual truth to actual power.

Fran of the Floods, Caballistics Inc The electricity went off forever. In Pat Mills’s book about his writing career he calls Alan Davidson, who wrote this panel and the rest of the 1976