Godzilla: King of the Monsters does that sequel thing where no one is ever outdoors, and the director has to treat characters in corridors as the most thrilling thing in the world, and the attempts at balanced sexual politics are inept. Meanwhile the visuals are in a suburb of the nightmare sublime: a ruined poisoned planet with evil leviathans screeching up through polluted clouds of cadmium-red destruction breathing lurid electric death. It’s like one of Frederic Church’s volcano paintings after half the lightbulbs have blown.

But this was peanuts to me, since I had just read Godzilla in Hell.

IDW’s licensed Godzilla comics have been more flamboyant than Godzilla films for a while, and Godzilla in Hell from 2015 frees several terrific artists from any minor issues of logic and lets them go bananas. Godzilla falls inexplicably into the actual Dante inferno on page one for no clear reason and then wanders around fighting whatever he encounters. Bob Eggleton draws an even more nightmarish version of King Ghidorah than the usual one; James Stokoe has Godzilla grappling a doppelgänger which splits down the middle and spews writhing crimson sinews much like something out of The Thing; and Buster Moody draws Godzilla encountering the Anti-God from some HP Lovecraft fever and getting in a punch-up with the Anti-Angels. It’s an artistic delirium that only this particular art-form could arrange; let me know when the current Warner Bros films have Godzilla trudging away from Hadean rubble with smoke forming the word Lust behind him.

It’s even mournful. Godzilla’s nice-guy credentials have been rock solid ever since he did his cute little victory pogo in Godzilla vs Monster Zero, and the new American films are lining him up as mankind’s designated driver in the era of climate disaster, like a very miffed dad. But Godzilla’s hell is an endless parade of pointless punishment beatings and brawls and aggro without even the merciful release of death—which is exactly the same as up here. 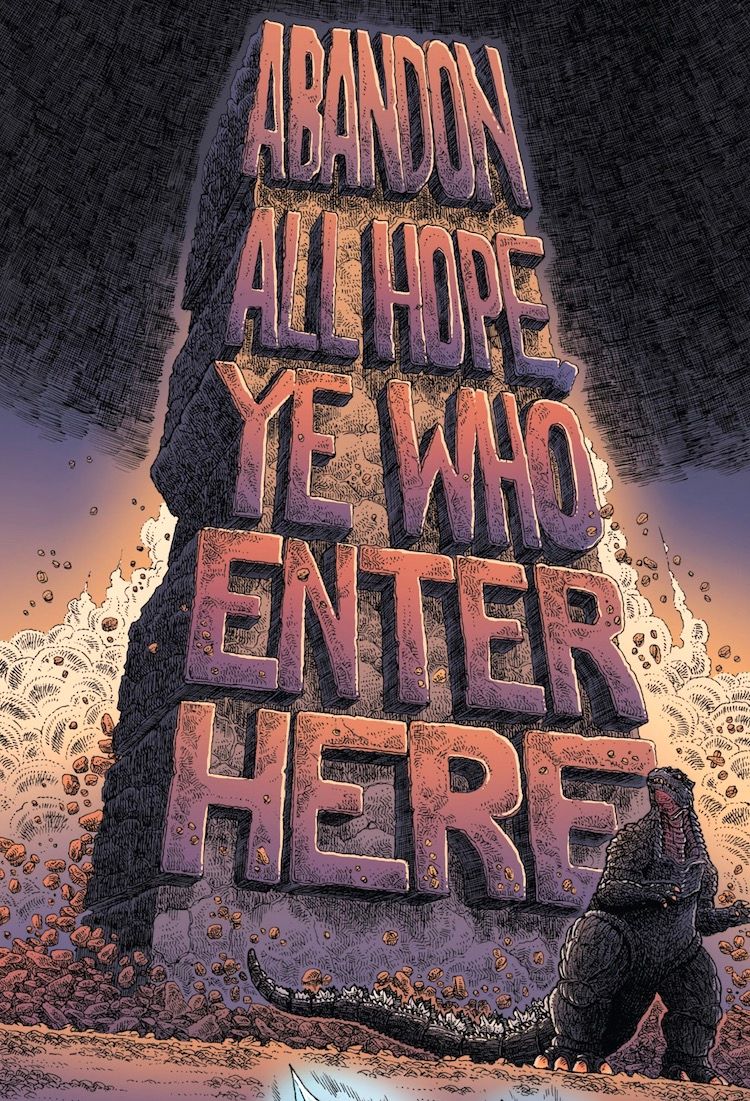 X-Men Dark Pheonix Or maybe, sic transit gloria Stewart. Bryan Singer has been cancelled, leaving behind only several fine films and my 1700 words about some of them