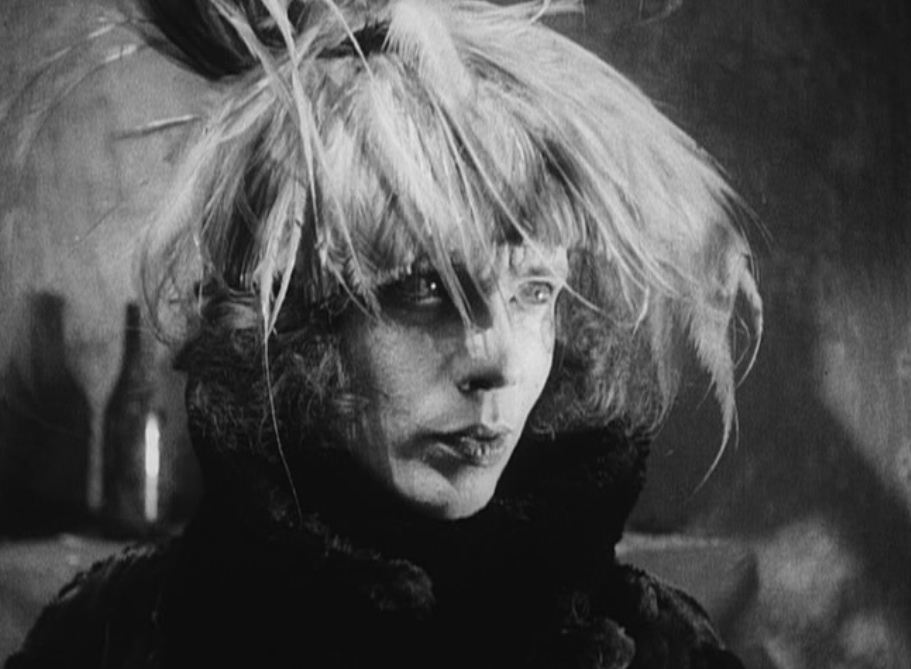 The greatest sight in The Extraordinary Adventures of Mr. West in the Land of the Bolsheviks (Lev Kuleshov, 1924) is Aleksandra Khokhlova sprinting down an icy Russian pavement in heels, when the film has already had to edit around several motorcycle riders failing to remain upright on the same streets or missing their marks and gliding straight into snow banks.

Actually the greatest sight is Aleksandra Khokhlova all the time. Built like Allison Janney and with a similar knack for making her co-stars appear to be leaning into a strong headwind, Khokhlova gives it everything she’s got even when she’s just standing there. Her down-at-heel grifter and former Countess responds to the latest harebrained scheme from the criminal mastermind living downstairs with a look of resignation that beams straight across the 90-year chasm between her and you: the dismal con is dismally on. Kuleshov’s career included long periods spent pondering the cinematic power of a human face, an understandable area of interest for a man married to the owner of that one.

There’s more to Mr. West than just the faces. Kuleshov puts a few other theories into practice too, nudging events along through various bits of visual shorthand, nested flashbacks, symbolic montage and the occasional upside-down camera. If the comedy wasn’t already dry enough to make the film seem at least partially modernist, the technique would do the job anyway.

A more interesting question is whom exactly the joke is supposed to be on. Mr. West, a visiting American under the impression that Bolsheviks are thuggish inbreeds waiting to hack him into small portions with sickles, duly attracts his own worst fears when he falls into the hands of the Countess and her fellow dingbats. Their over-elaborate plan to fleece Mr. West of his travelling money flies way over the head of West’s moderately useless bodyguard Jeddy, an unreconstructed cowboy who insists on wearing Western gear in a Moscow winter and sits on the roof of a taxi trying to ride it like a stagecoach. Jeddy’s vision of Russia is even more panicky than Mr. West’s, as per a cutaway gag of two fur-clad goons sat around a miserable bonfire while a woman of unclear morality bounces on a hammock waving her legs in the air.

How even-handed Kuleshov is being towards the visiting cowboys and the domestic conmen is open to interpretation. There’s too much overlap between Mr. West and the output of the silent comedy production lines churning away in Los Angeles for Kuleshov to have been disdainful of what was going on over the horizon, but the bits of US-style business that he appropriates feel more like pastiche than homage — not least because they’re not all that funny. People in authority stay mostly un-mocked, straining the ties with the American model even further; but this might be less of a mystery. Lenin was gone by early 1924, and creative types must have spotted that the forecast for continuing experimentation and free play in the arts was looking cloudy.

So instead Mr. West contents itself with a well-practiced comedic straw man, and puts its efforts into making Mr. West a credulous twit who can hardly have made his wealth through street smarts. And Jeddy is just a buffoon, waving his pistol at passers by and at one point lassoing a policeman in order to wrangle him like a steer. Clearly both visitors are in desperate need of exposure to authentic Bolshevik principles.

Eventually they see the light. Mr. West is disabused of the notion that Russian culture lies in ruins and resolves to put a picture of Lenin on his office wall. Jeddy, having taken the cowboy outfit off in an early gesture of détente, shows his boss a real Bolshevik, pointing out a state policeman whose profile is carved from granite and whose smile foresees no coming years of torment or chronic shortages of shoes.

Suitably reassured, Jeddy puts the cowboy outfit back on and seems all set to be assimilated into Russian society without touching the sides, via the companionship of a pretty American expatriate he once saved from muggers. The pair even adopt kittens. Meanwhile the grifters end up behind bars; the Countess doesn’t look too bothered to be out of business, but the limitless supply of lookalike gangs lurking in every urban rat-hole suggests that the police department still has aristocrats left to sweep up.

Someone in a position to know all about the doings of that department as well as all the other ones turns up in person right at the end, when Kuleshov’s comedy smacks straight into a snow bank of history. The climactic montage of collectivist endeavour includes a glimpse of Leon Trotsky, presumably unaware that his own extraordinary adventure was about to take a turn for the worse.

Robocop(s) I reviewed the new-model RoboCop for Critic’s Notebook, a film which proves all over again that film reviewers and film critics do not have the same

The Long Goodbye In SoFilm magazine I reviewed the recent Arrow Films Blu-ray release of The Long Goodbye, a disk that was already groaning under the weight of