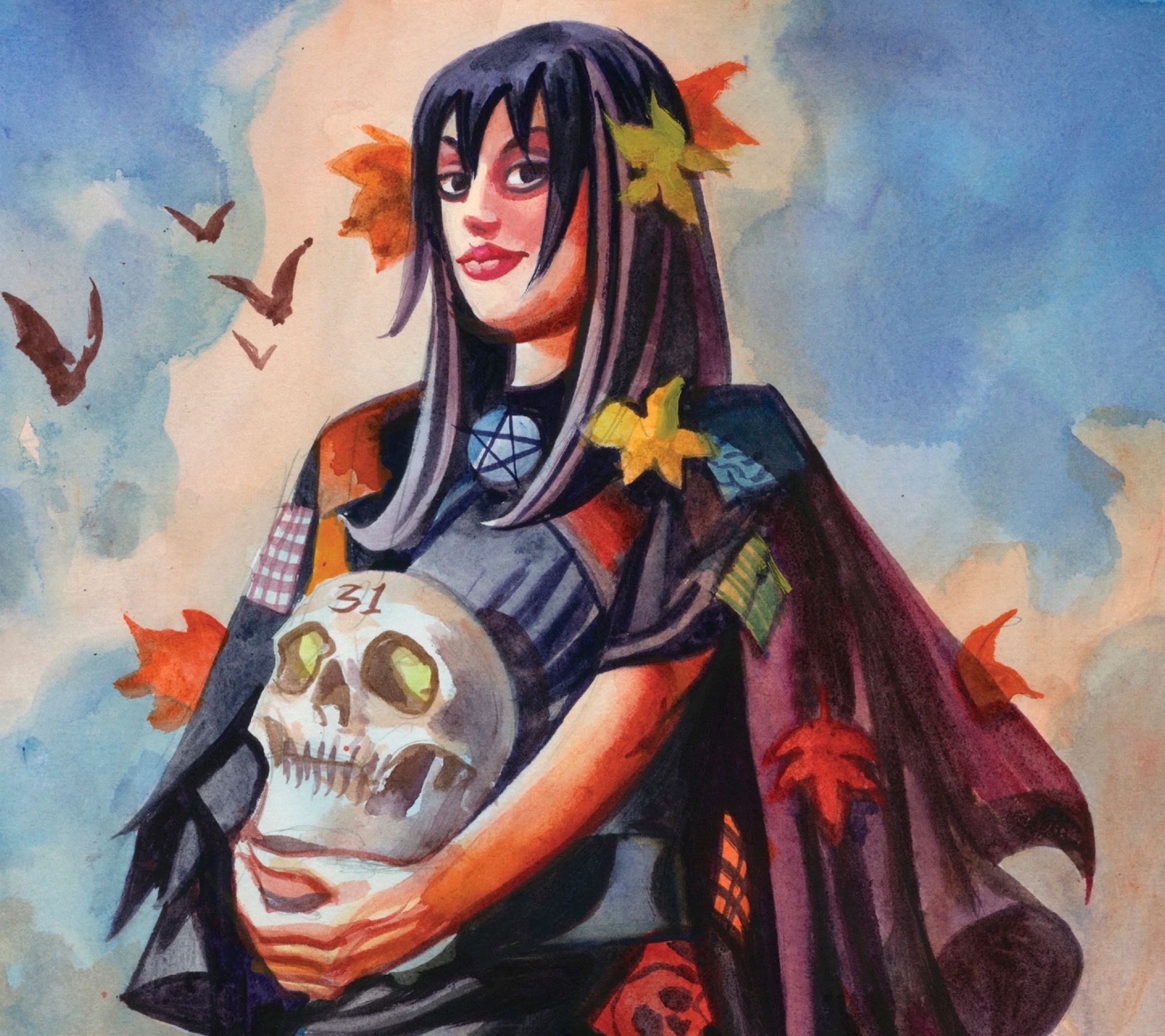 Since Dan Brereton’s Nocturnals first appeared 25 years ago this month, this is the piece I wrote in Comic Scene magazine for Halloween 2018 about Brereton’s comic, his art, and his current home in a very American genre of the Soft Macabre.

If horror comics have to chill the blood or be disqualified from the club, then Dan Brereton’s Nocturnals stories might not count. They do have reanimated corpses, vengeful wraiths, monstrous cephalopods from the ocean depths, apocalyptic warnings of doom, and sorcerous old crones trying to cook young girls in cauldrons on Halloween. But they also have outcasts finding peace, orphans finding their parents, and old Mafiosi finding the better angels of their nature. They have heart. And they have a singular artistic style, the vividly colourful painting technique that Brereton has been honing since the Nocturnals crew first arrived in comics more than twenty years ago.

That was in Black Planet, a 1995 mini-series from Malibu’s creator-owned Bravura imprint which in good Shakespearean style keeps the saga’s eventual protagonists off-stage for a while. It starts instead with a confrontation in the sewers, between a sympathetic reptile-man named Komodo and the gun-toting enforcers of the Narn K organisation, which is apparently busy creating monsters. No one involved is remotely human, but the sewer setting is on loan from The Third Man, the bad guys wear the coats and hats of 1940s heavies with flinty dialogue to match, and Brereton’s plan to splice characters from supernatural horror into the settings of film noir is in place already.

Human beings do turn up later, as the story spreads out across its Northern California setting of Pacific City, where crime families with Italianate names manoeuvre for power and rumpled police detectives wonder what they just glimpsed in the shadows. But Brereton’s focus is on the monsters, particularly a group who are more authentically humane than most of the mortals, and led by the man known as Dr Nicodemus Horror.

Neither horrific nor technically a man, Doc Horror tends a band of outcasts with the paternal compassion of an early Professor X—if Charles Xavier had arrived from another dimension, escaping persecution from vicious squid-like monsters now intent on pursuing him across our world too. His nocturnal companions include Polychrome the wraith, Starfish the amphibian, and Gunwitch, a silent hulking enforcer wearing a hat from a Sergio Leone zombie western, who shoots first and never utters a word later. But the heart of all the stories, and the key to Brereton’s intentions, is Horror’s precocious, endearing and equally alien young daughter Eve. Horror was once employed as muscle for the Pacific City mob himself, although that was when he thought Eve had been lost in their trip across dimensions. Unexpectedly reunited with his only child, the alien man of violence rediscovers his humanity and changes his ways.

Similar arcs of compassion have played out across Brereton’s Nocturnals tales ever since. In 2001 The Dark Forever allowed Starfish to discover more about her aquatic lineage, and Brereton to deal explicitly with sea monsters and ancient races in the vein of HP Lovecraft; but also forced Eve to face her own insecurities, when another young girl-creature inserted herself into Doc Horror’s affections. Most recently The Sinister Path, a 2017 crowd-funded one-shot, introduced two new creatures, an angry brother and sister from another sundered family with their own grudge against one of Horror’s old friends. Eve, now more mature than she was in 1995 but still youthful and sharp as a tack, ultimately reunites an embittered parent with a lost child just as she was once reunited with her own father.

The effect of Brereton’s comics comes from these humane—even romantic—stories, told with monsters, in art of vivid colour and muscular cartooning. Black Planet arrived on the heels of Alex Ross and Marvels, when Ross’s crisp lines and Norman Rockwell figures seemed to be the path which painted mainstream comics would happily follow, but Brereton promptly went another way. The blazing pigments and visible brush strokes and soft fluid skies tie his painting back into century-old modernist traditions, while at the same time the 1970s comics art of Gene Colan and Tom Palmer is a constant presence is every shadowy room.

Brereton’s series of portfolio art books shows what happens when he applies this style to other people’s creations: Iron Man becomes a menacing golem against a thunderous sky, a tonne of implacable matt statuary, the colours in his armour looking like seams in rock. Another piece has a naked spacegirl astronaut relaxing on an alien world, a respectful Wally Wood homage that takes Wood’s symbols and sets them in motion at a higher temperature. There’s even some Kirby Krackle in the sky.

Works like that also make Brereton’s technique seem inherently American, most clearly so in the modest 1997 Nocturnals Halloween story Witching Hour that appeared in Dark Horse Presents. Eve and Gunwitch venture beyond the edge of town and encounter a clan of sarcastic pumpkin creatures in the woods, goblins who promptly mistake Eve’s Halloween bucket for a dead relative. It’s an interlude between the heavier stories, with Brereton’s art modified to match, emphasising open panels, negative space, and a constant wash of pale moonlight; but at the same time a strip not a million miles from Charles Addams.

Brereton has lately started using Kickstarter to publish new Nocturnals stories and companion art books, which is as good a route as any for keeping both his art and Doc Horror’s crew out in the wild where they belong. A comics landscape with these particular horrors in it can always look to them for a little empathy and human kindness. Misunderstood monsters can be persecuted and alien squids may pull the strings, but in Nocturnals the cosmos naturally bends towards optimism and compassion eventually, towards family and love. Even in the dark.