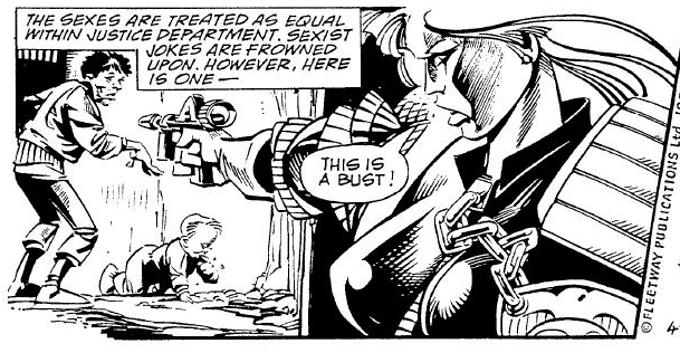 Alan Grant and Cliff Robinson did a Judge Dredd story in 1990 with the characters turned into versions of the Carry On team, but it was such a sublime echo of Jack Davis and Mad Magazine that it never felt all that British, despite Judge Bristol responding appropriately to comments about taking down her particulars. Dredd’s most properly Anglo moments, it turns out, were already spreading themselves out across the years of Daily Star newspaper strips, in which Grant and John Wagner moulded their Mega-City melodrama into strict single-tier portions with clear glee for how strips like Jeff Hawke and Modesty Blaise ticked, and for the pulse of a three-panel rhythm shoving a cartoon forwards every twenty-four hours. Rebellion’s archiving of everything on its books has started to collect the daily strip into hardcovers, and will eventually get to things that Wagner and Grant didn’t script — but in the meantime the ones which they did steer are getting their due, including the times that Cassandra Anderson slinks off her motorbike and stands side-on.

A fair accounting is also the aim of The Mighty One, a memoir by Steve MacManus about the first decade and a half or so of 2000AD as well as the few years before the comic came into existence. Tales from the 2000AD trenches are not unfamiliar by now, but the prenatal warm-up period from 1973 to 1976 is at least as significant. Several of the UK’s cultural tectonic plates shifted into position — or possibly just seized up — at a time when what was about to happen to British publishing was impossible to predict, and what was about to happen to sci-fi looked as likely as psychic judges. A certain wistful nostalgia for the simpler days of Valiant is hard to shake if you were mastering joined-up writing at the time, and any nostalgia for the later days of Robert Maxwell is very ill-advised, but MacManus keeps the world outside his office in sight while outlining what was going on inside it as his trade progressed from one of those eras to the other — which is about the best you can expect of any pop-culture autobiography, even when few of them bother to do it.