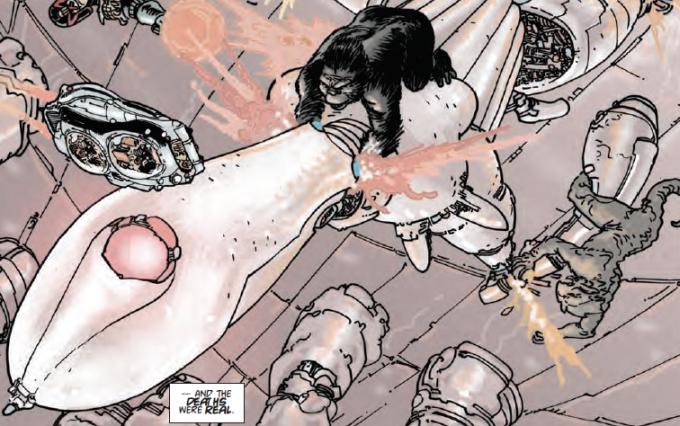 Whether or not Judge Dredd kicking Colonel Sanders in the face and stabbing the Michelin Man with a scalpel was really the best part of 2000AD’s slightly-banned Cursed Earth story line in 1978, it was certainly the one that stuck firmly in the memory. Which is more than you can say for that marsupial bucket of pathos named Tweak, erased completely from my recollection until we came face to face again in the new edition that’s just come out from Rebellion, which I reviewed for Tripwire. Viewed from nearly four decades down the tracks, the urge of its writers to redline the comic’s general rate of rotation and see what might fly off is a more audacious move than all the business with Burger King, although I can see why it didn’t appear that way at the time.

Pat Mills didn’t write the bits where Dredd runs into half the brands on sale in Fine Fare, but then that’s not really his kind of satire. The more Swiftian class conflicts and workers’ purgatories of Ro-Busters are closer to his calling, and Rebellion has also republished more of that strip from the same era to prove the point.

Cassandra Anderson has nothing left to prove by now, so Alan Grant’s long-term plan to treat the character as an authentic tragic hero requires the piling on of all appropriate agonies as part of the deal. Another shovelful for the now middle-aged psychic arrives in the latest Judge Anderson Psi Files collection, although not before she’s also dragged into the latest symbolic discussion of Mega-City One’s masculine mystique between King Kong and a giant phallus. Characters lucky enough to have her longevity can pull off that kind of switchback manoeuvre from comedy to tragedy — and so can Alan Grant — but it helps that Anderson is still a vivid, lively creation. She is 2000AD’s sweet spot of pragmatism, spirituality and firepower, with cosmic balance on her mind and Cosmic Trigger on her bookshelf.

Growth potential Some recent technology news stories I had a hand in: The United States wants to double the pace of research into tackling cancer, and do in the next