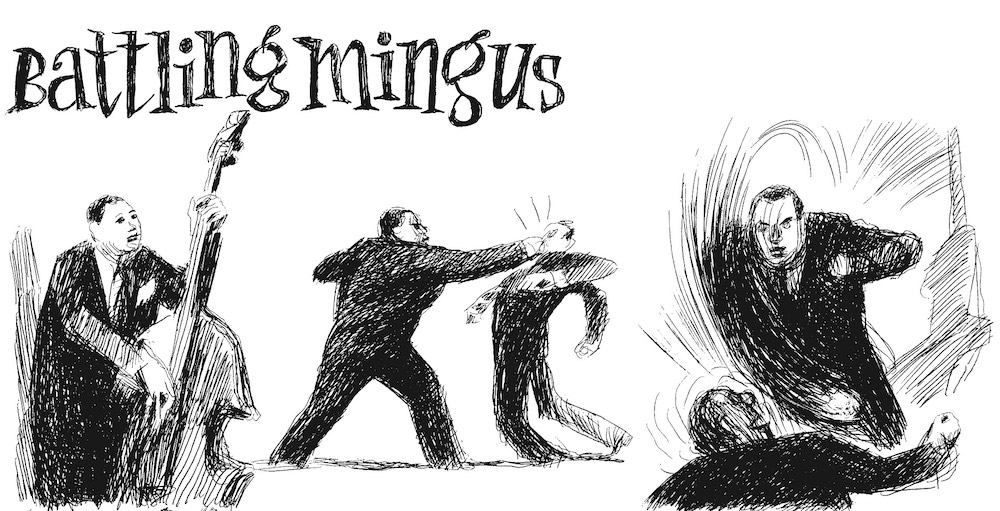 The only meetings between cartooning and jazz that I used to see were the jokes in Jazz at Ronnie Scott’s, so the French strips by Blutch reprinted this year by Fantagraphics in Total Jazz are a transmission from the other side of the cultural moon entirely. There’s some gentle self-mockery that Ronnie Scott would have approved of—the stylings of John Coltrane drive all the residents of a household crazy including the cat—but a lot of them venture where gags from Frith Street would not have cared to go.

Sometimes Blutch draws the jazz itself, the form of the music rendered in brush strokes, which puts him on a similar very European wavelength as Guido Crepax drawing Valentina’s sexual pleasure as ink on paper. But more often Blutch’s lyricism comes before violence, and then follows it too. If Charles Mingus’s punch-ups are par for the biographical course, then the domestic assault inflicted on The Scene’s anonymous wife or girlfriend is far more unsettling—made worse by Blutch’s scratchy ink lines, as though the tenor sax player pummelling his woman in the face was fizzing with incoherent rage, violence enveloping him like a fog. The panel where she’s on the ground is dire stuff. 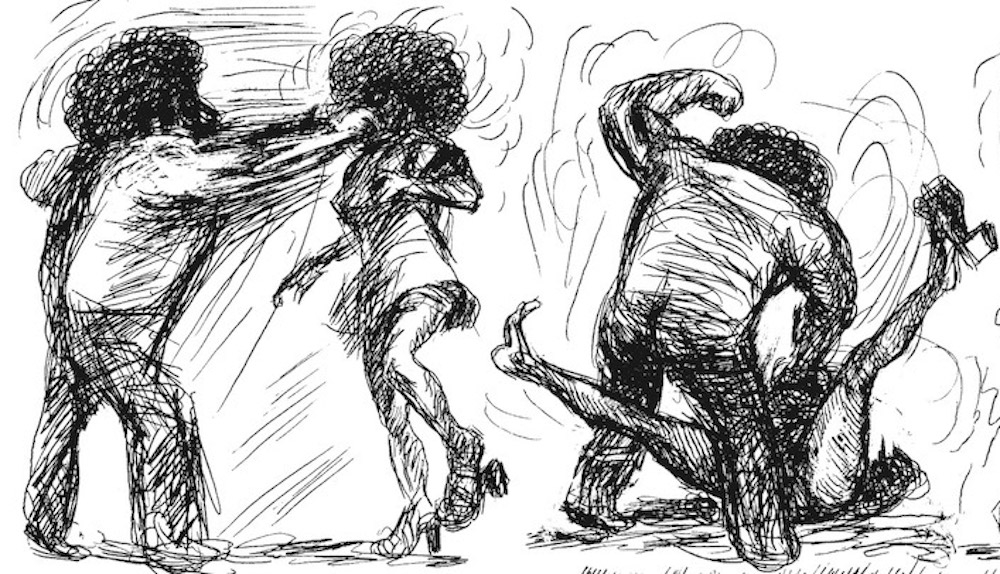 Blutch’s inks are tender enough on the faces of the young and the dying to testify to his sincerity, but there’s a representational monkey wrench through three stories depicting Native Americans, two of them drawn in a lush charcoal wash unlike anything else in the book. The other, an official preface, has a tribal chief and a warrior brave chatting incongruously about the nature of archival publishing and the dredging up of old jazz cartoons long after the cartoonist has moved on. The North American miseries shared by African and Native American peoples have helped shape the music that’s under Blutch’s microscope, but put this kind of irony and theatricality close to each other in the current cultural test tube and there will be questions of appropriation. The best response is still the small matter that using art to detect an artist’s hidden wickedness is a tempting trapdoor to oblivion and well worth avoiding—as if sincere art need be well-tempered and well-behaved in the first place.

In any case, the cumulative tone of Blutch’s cartooning is complicated enough on its own to suggest all the cultural contradictions lurking under the turf, with seams of sex and surrealism everywhere. Dealing with jazz without dealing with sex might amount to missing the point—it was the topic of the original French edition’s cover, a half-naked white woman being caressed by a group of jazzmen as if they were playing a keyboard, which Fantagraphics has opted to do without. One story ends with four white male long-haired a capella singers communing with the black female singer whose song they have covered by worshipping her extremities in some pagan ritual of consumption and sex; or possibly just of jazz criticism. 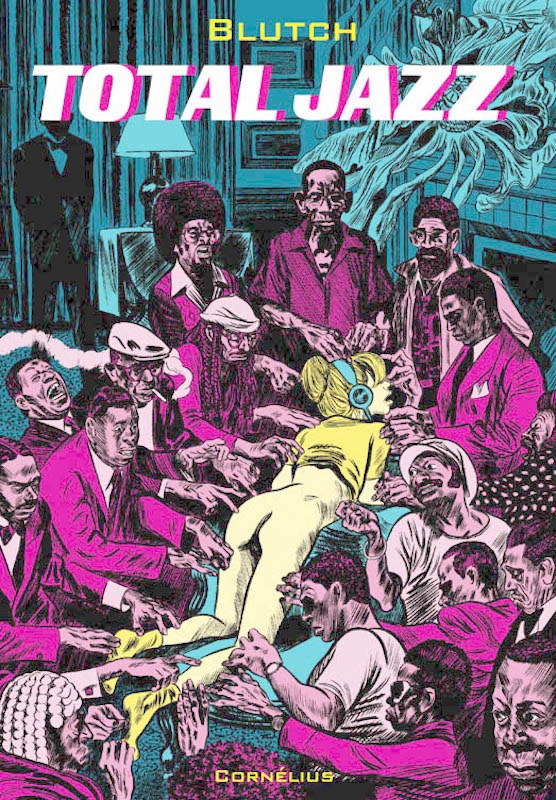 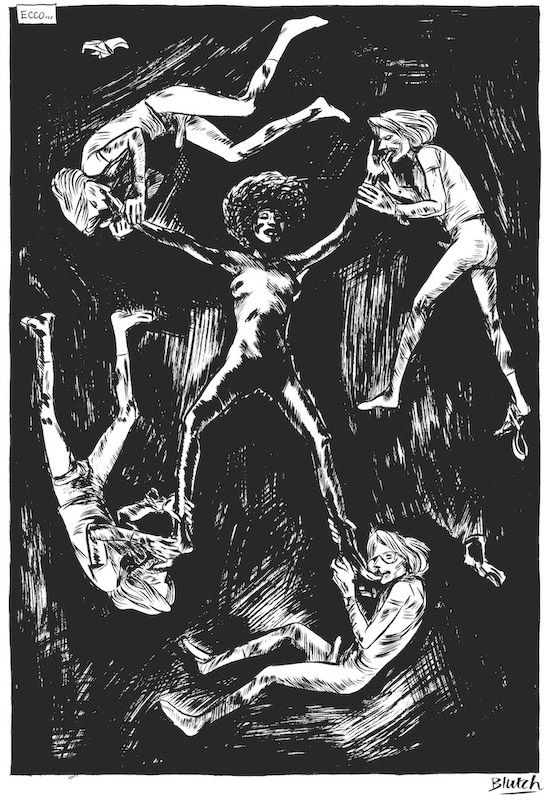 The surrealism is a bit less predictable, jolts of occult static bubbling up from the agony and ecstasy of the music. A saxophone duo are linked together by an indistinct mutant musical instrument with multiple mouthpieces; and an even more abstract cubist mechanism supplants the human players in a historical sequence, a sight which now makes me think of FBI Special Agent Phillip Jeffries evolved into a big steam kettle in Twin Peaks. One full-page image has multiple males regarding Josephine Baker with a tense combination of disdain and self-destruction; another page of portraiture includes near its centre an impossible visage, a male face so folded-in and melting that it could have arrived up from one of Clive Barker’s hells. Blutch puts the physical pleasure and physical pain of jazz for both sexes so close together in his strips that the erotic and the despairing are welded at the root. This gentleman and his warp spasm could be one of the severe and unknowable house deities of the book. 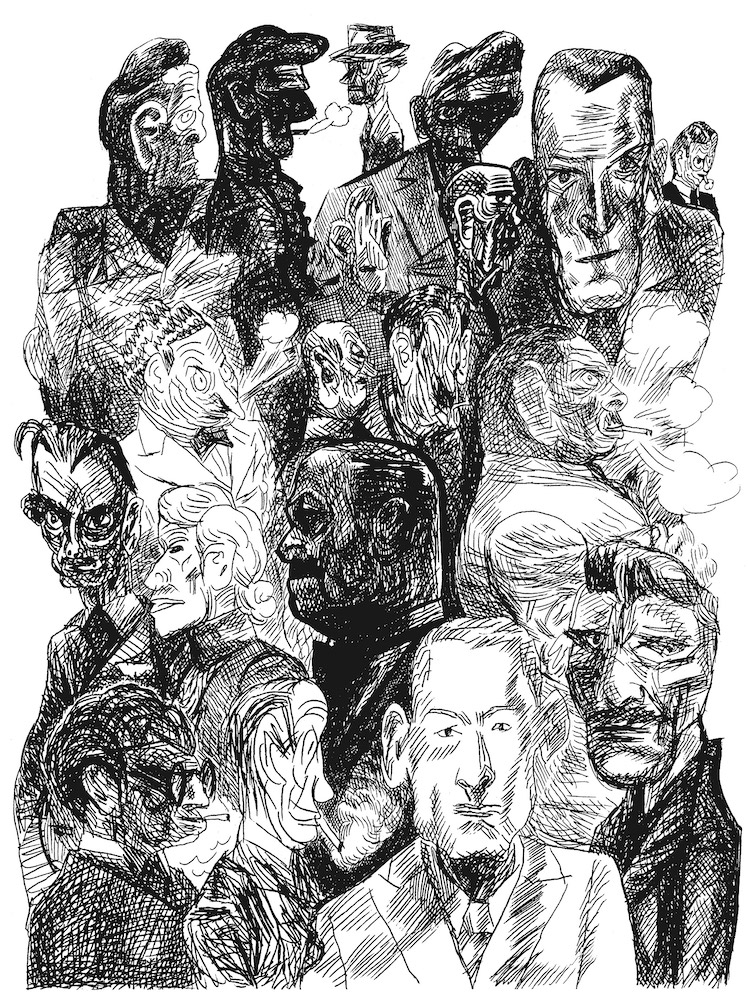 Papillon, First Man The January/February Sight & Sound magazine includes me reviewing the new remake of Papillon, another film adaptation which ends by showing the

Suspiria, The Girl in the Spiders Web Before everyone saw Luca Guadagnino’s new version of Suspiria he was professing his love of the old one to the point where it seemed he might turn