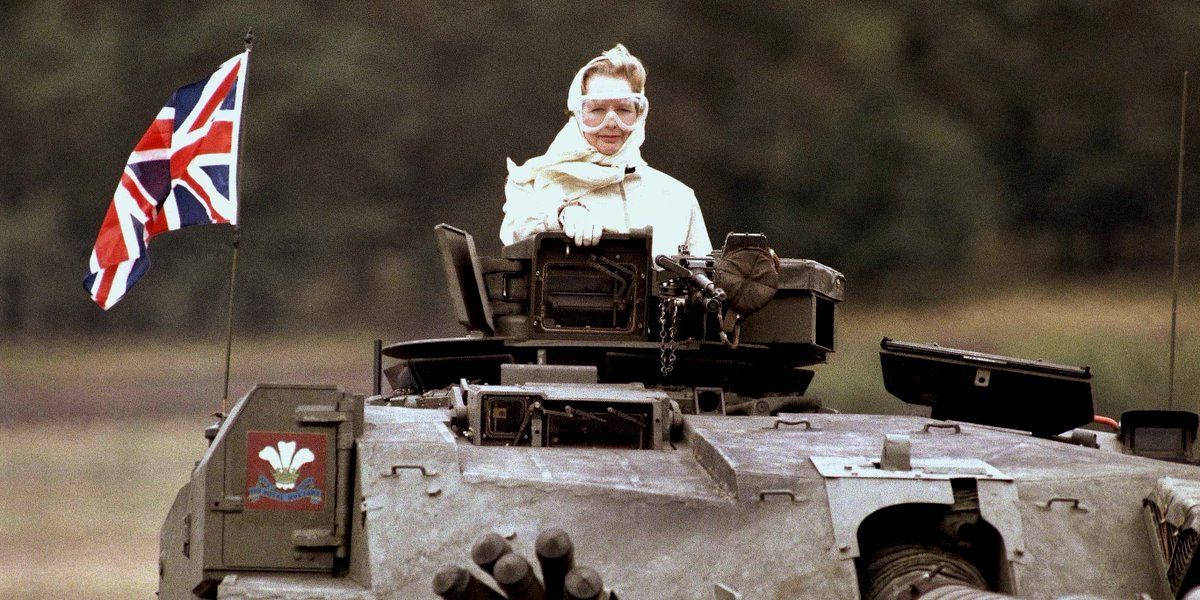 Idly re-reading 30 years of Tank Girl comics during a dire pandemic and political meltdown is to watch writer Alan Martin tend his holy flame without ever peering over the temple walls, much less leaving the grounds. Not even the issues eventually drawn by Mick McMahon—the Saw franchise remixed by The Young Ones—can decently process the radioactive negativity of those photos of Margaret Thatcher tootling around Lower Saxony in a Challenger tank which presumably played a part in the strip’s creation, images already beyond parody at birth. If the comics had any solid political goal, it got diluted by the twin tracks of standard Tank Girl studies: that the strip was 1) punk and 2) feminist. The second claim has to accommodate the shortage of female creators whose names have ever appeared in the credits, and the first trips over the small fact that the strip is as punk as a lemon pip. The major guide-stars for Tank Girl are elsewhere, things with one foot in British absurdity like Roscoe Moscow in Sounds, plus most of Viz, already a decade old before Martin and Jamie Hewlett had a head of state soil himself for want of a colostomy bag in Tank Girl’s first story.

The real mind-bender is to read Shaky Kane’s comics from the same issues of Deadline, work beaming in from further afield altogether—possibly from Spiegelgasse 1, Zurich. The 2017 Good News Bible reprint of this stuff makes Kane’s A-Men strips and their very 1980s religious terror seem hammered into Deadline like a titanium spike, the anode to Tank Girl’s cathode. Whatever the publishing calculations involved in Deadline, and by all accounts it couldn’t have lost more money if it was printed on gold leaf, its role as a delivery system for Shaky Kane art excuses a lot of other things. Dipping coincidentally into Greil Marcus’s Lipstick Traces, the book falls open at passages on the dadaists at Cabaret Voltaire and the “stage happenings, simultaneous poems and mock rituals” underway in downtown Zurich 1916, which could also be a stab at describing some of Kane’s instinctive cartooning, cutting up and reforming reality as he went. Marcus reckons that London punk was partly the underground currents of big daddy Dada breaking the surface again, which would make Shaky Kane’s comics punk enough to put Tank Girl into a coma. Plus right there is the photo of Hugo Ball’s Sorcerer costume, some prototype Shaky Kane walk-on character, the A-Men’s janitor. Marcus thinks performance venues like the Cabaret would seem as good a laboratory for change as any other; so are Shaky Kane comics and Greil Marcus books, and since they remain open for revolutionary business we should probably read some. 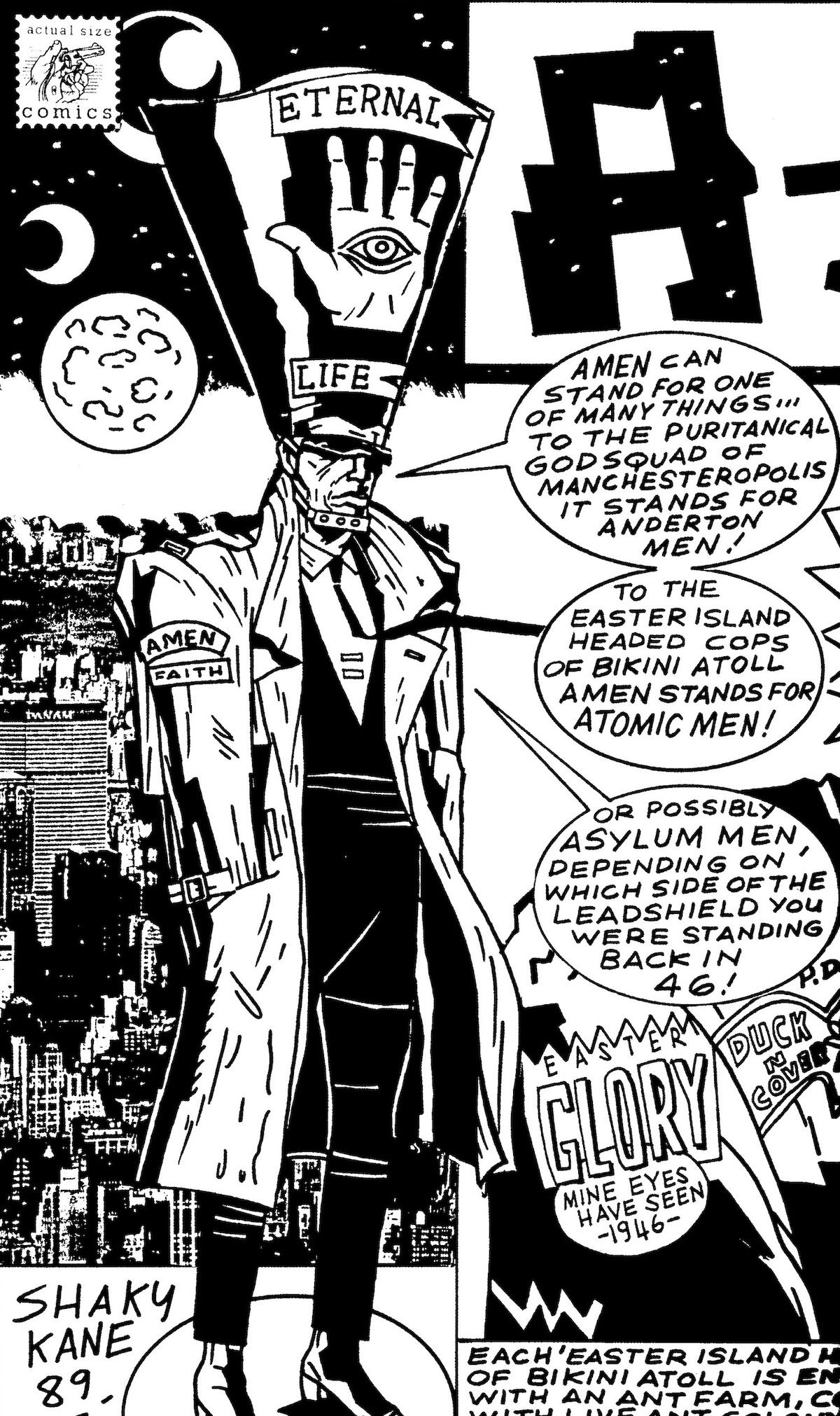 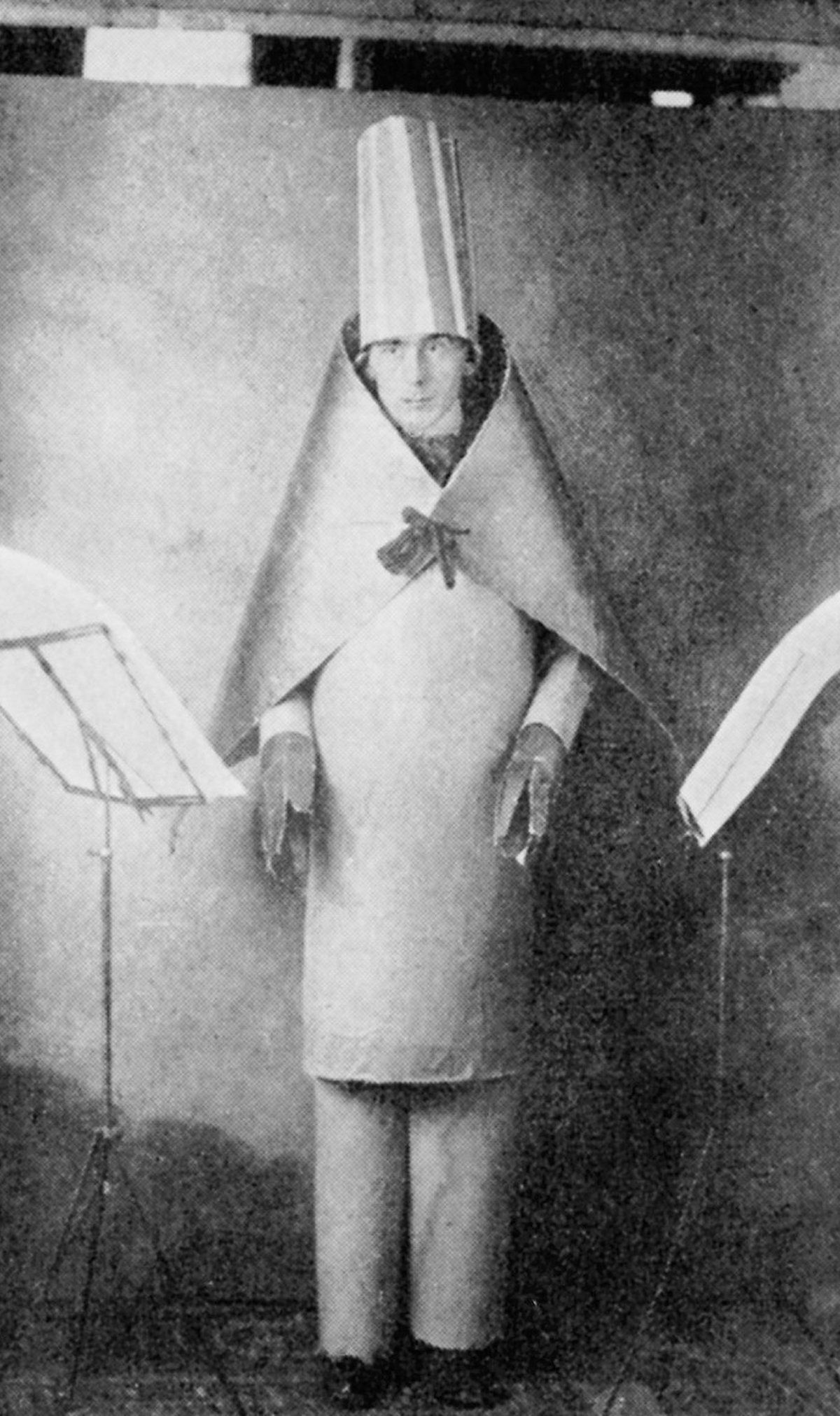 Dreamland, Greed Calling a film Dreamland gets your excuse in beforehand for any amount of arch unnatural gurning, but the latest Dreamland (latest of many) already