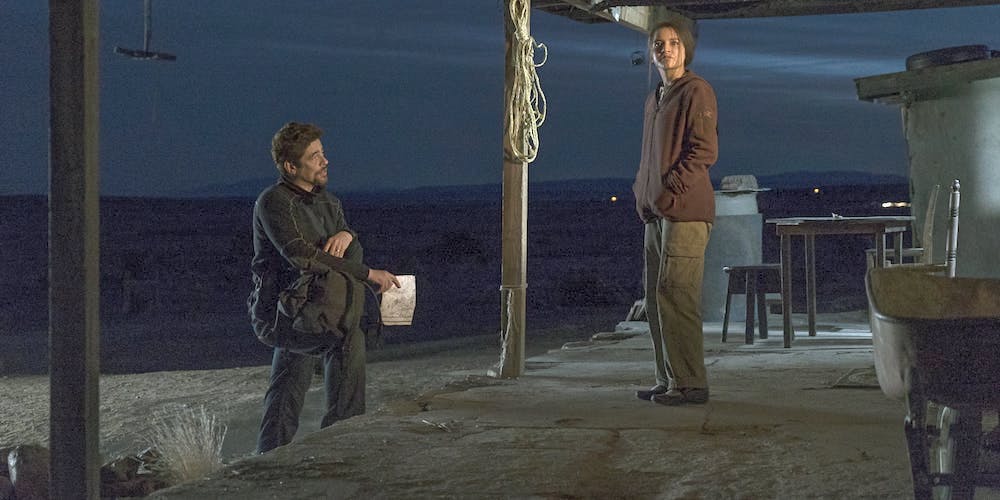 It’s been mooted by some that Denis Villeneuve might be a not-great director who just directs the hell out of the scripts he takes on, which sounds like one sign of a great director to me. The difference between Sicario and Sicario 2 Soldado is mostly down to the change from a high style to something more routine, and since Taylor Sheridan wrote both scripts the likely source is the swapping of Villeneuve for Stefano Sollima—who, whatever else he does, does not direct the hell out of it. Sheridan doesn’t do the new man any favours, leaning into that old standby The Strong Man’s Dilemma, and doing without meaningful adult women at all—apart from a cheery US soccer mom earning a crust through people trafficking with a baby in the back of her car, which is the best moment of pointed commentary in the film—but it’s Sollima who finds ways to shoot Josh Brolin and Benicio del Toro that come straight out of the Cannon Films catalogue circa 1991.

The general Cannon-ness has convinced a few people that Sicario 2 Soldado is a Conservative work, even though one thing that actually survives the sequel-manufacturing machine is Sheridan’s uncertainty that good people are righteous warriors able to change the world. Or good men, anyway. There’s been an attempt lately to banish Wind River within 12 months of its appearance, on the theory that its female character was made naive and out of her depth—as if an arc that starts there was a regressive thought crime by definition. Wind River is sedate and mournful, and more indirect proof of the influence of Sollima and Villeneuve on Sheridan’s scripts, since he directed that one himself. There’s also the small matter that Wind River shreds toxic masculinity, takes it to the absolute cleaners; but why let facts get in the way of a philosophy. I reviewed Sicario 2 Soldado in the September issue of Sight & Sound magazine.

Octobriana comics The August issue of Comic Scene UK magazine has an article by me about Octobriana, a cult character not so much out-of-copyright as