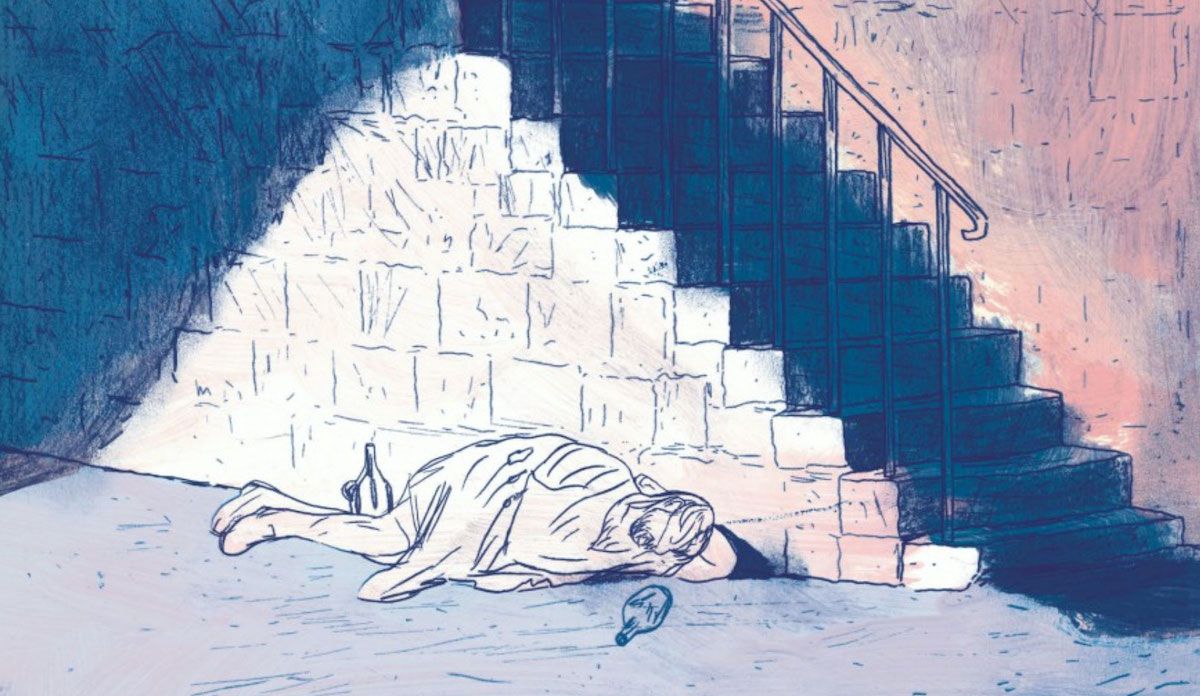 The 18th-century lush who stumbles around plastered in Portrait of a Drunk inflicting misery and death on everyone he meets is named Guy, so readers wondering whether the joke is aimed at any particular group of people should probably start with that. Despicable at first and then deteriorating from there, Guy’s bad behaviour is clearly going to earn him no comeuppance—although if he gets the loot he’s after there’s every chance of him tipping his prize into the ocean soon, sloshed again—which makes his one tiny ambiguous flicker of compassion in the middle feel even more dire than it would anyway. It certainly doesn’t do the young apprentice he fleetingly seems to be concerned about any good, since the kid’s already become one with the cosmos and is peering at Guy from an afterlife that’s swathed in heavy blue drapes like David Lynch’s vestibule.

The sour and stylish Portrait of a Drunk is a joint effort from Olivier Schrauwen and Florent Ruppert & Jérôme Mulot, and before reading it I had assumed it would be easy to spot who had done what; but panel-by-panel it’s nearly impossible. Schrauwen’s combative intellectual mockery is pretty distinctive—or distinctively Belgian if my struggles with films by Bouli Lanners and Jaco Van Dormael is any indication—and the feeling that the story is viewing its characters from an altitude of ten thousand feet feels like him. Ruppert & Mulot are comfortable lower down where the story’s sexual slapstick and kinetic violence flow from, something for which they have a knack. But Portrait’s bits of narrative free-for-all and layout gameplay could have been passed back and forth across the desk by any of them, along with the jokes. As in any morality play, the trick is to spot the void where your own morals are supposed to be; plus be reminded that where you end up will be where you started, no matter how much water has been passed since then.

Artistic coincidences: The separated body parts and spectres spying on Guy from limbo, which eventually gang up and torture him during a feverish hallucinatory sickness, include a headless body with a face in the torso. And reviewing Strontium Dog: Search and Destroy, the latest reprint of that strip’s first life which I hadn’t read since it was new in 1978, there’s John Wagner and Carlos Ezquerra’s first depiction of the story’s mutant underclass. Grotesques as a common artistic language.

The Old Guard, 6 Underground, S Craig Zahler Film criticism might once have had to be dragooned into doing PR for Netflix but these days it’s obliged to volunteer, so it gave The Old Guard a

Dreamland, Greed Calling a film Dreamland gets your excuse in beforehand for any amount of arch unnatural gurning, but the latest Dreamland (latest of many) already