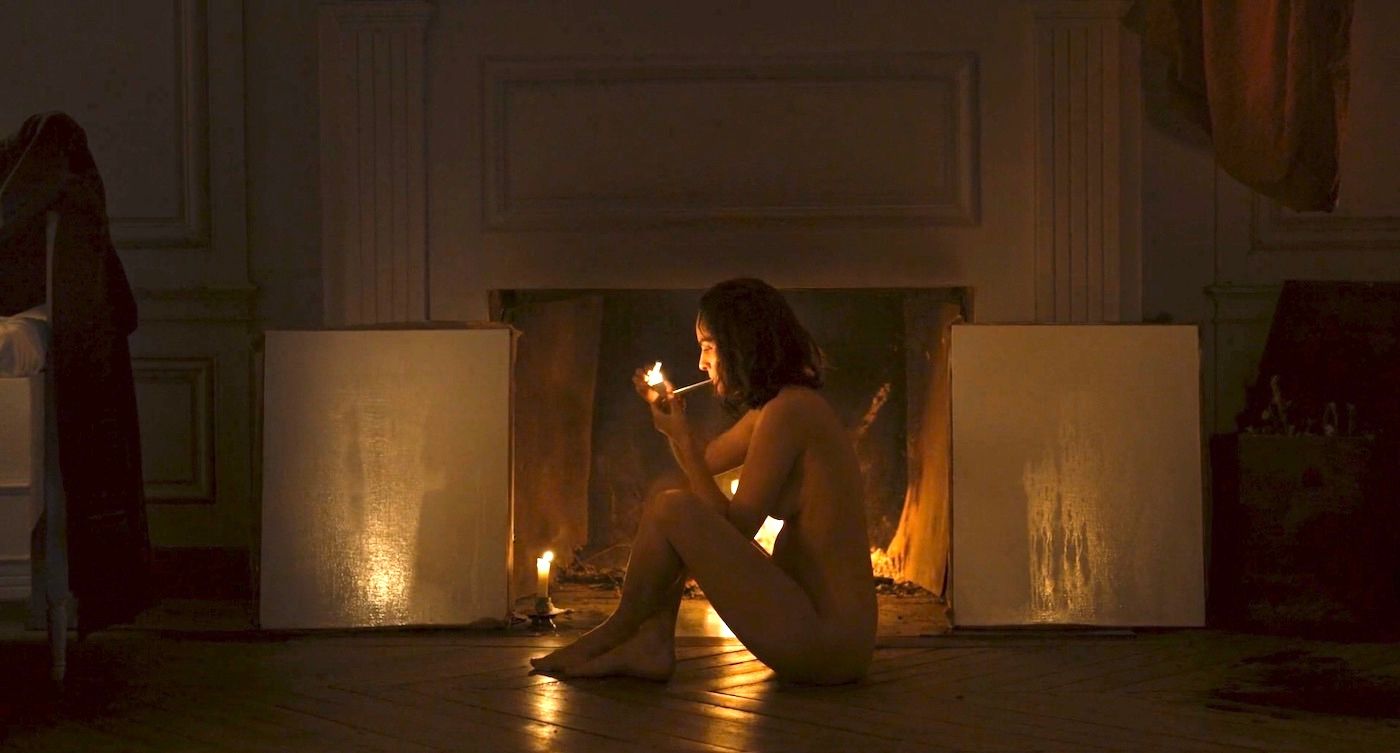 Not much about Portrait of a Lady on Fire is a surprise for anyone following Céline Sciamma’s humane and compassionate films of queer caution, and neither is that very French thing of staging a costume drama and making it modern through the faces and charisma of the performers involved—see also Catherine Breillat casting Asia Argento in The Last Mistress and driving a spike down through the film’s historical aspects and into the soil of 2007. (Anglophone films are wising up to how hiring Florence Pugh can do the same thing.) In Portrait’s case Noémie Merlant and Adèle Haenel both seem sparky enough to have arrived in 1790-ish Brittany direct from Montmartre via Vespa. There’s a specific shot of Merlant sat naked in front of a fire lighting a pipe while illuminated by a couple of candles that’s a pure crystal of one particular gaze and style, and couldn’t be clearer about that style’s country of origin if she was sat on a Tricolore rug.

Christopher Nolan does modernity and tradition in Tenet as he always does, the combo that still makes critics call him “chilly” when it’s been clear for several films now that Nolan is a big softie. But unlike those Tenet doesn’t have the element of romantic love and resulting guilt at its heart, and suffers. The nearest thing is the pairing of Kenneth Branagh (redoing the dying Russian routine from his own Jack Ryan film, which proves no one watched his Jack Ryan film) and Elizabeth Debicki, a sour squabbling marriage that makes you want to throw both of them overboard from his yacht. Without that solid C-major tonic at the centre, all Tenet’s thunderous engineering is built on Nolan’s sci-fi nonsense instead. Which this time is nonsense indeed, occurring not in the deeply personal head space of your dreams or the equal moral isolation of outer space, but now all over the place in the real world; a distractingly numbskull notion. I liked the cheapo sci-fi hardware, like Nolan’s chrononauts have to share PPE suppliers with the National Health Service, but the idea of a massive all-out armed conflict between squadrons of time-split armed forces out in the open, Chinooks landing backwards and all, needs more finessing than Nolan gives it, which is basically none. Reviewers keep trying to connect Nolan with James Bond and Stanley Kubrick, but not for the first time it would have been the arrival of Tim Thomerson from the world of Charles Band’s Future Cop that might have fitted.

Modernity everywhere in She Dies Tomorrow, which slaps the decadent mood of the era and the plague-ridden panic of this exact second into the same blender, so that one metaphor fits all. A bunch of Millennials passing along a maybe-virus that convinces them of death’s imminent inescapable arrival and just wandering around emoting about it, a ton of existential unhappiness arriving randomly like the dude delivering your pizza, is sublimely on target. Not mentioned upfront in enough reviews, you feel, is how the same thing works as a merciless parody of indie mumblecore self-indulgence on film and indeed in general, which writer/director Amy Seimetz plays with the stoniest of straight faces. If the mock-noir title wasn’t a clue (Kiss Me Tomorrow or She Dies Deadly would also work), Seimetz presents the title card with a hammer cut and a blast of Mozart Requiem, as effective a cliché as any film maker could go for. There’s a scene in which a man disconnects his sick father’s life support and his girlfriend promptly breaks up with him right there in the hospital room and I was nearly helpless on the floor. Even better, Seimetz visits an expert in leather tanning and when he walks on it’s James Benning, the most unlikely director cameo since that time Scarlett Johansson kicked Jerzy Skolimowski in the knee. Calling it She Dies Laughing might have been nearer the mark.

Nocturnal, Lynn + Lucy In the October Sight & Sound magazine some words about Nocturnal, a small-scale British working-class film of fatherly anguish. That period when the