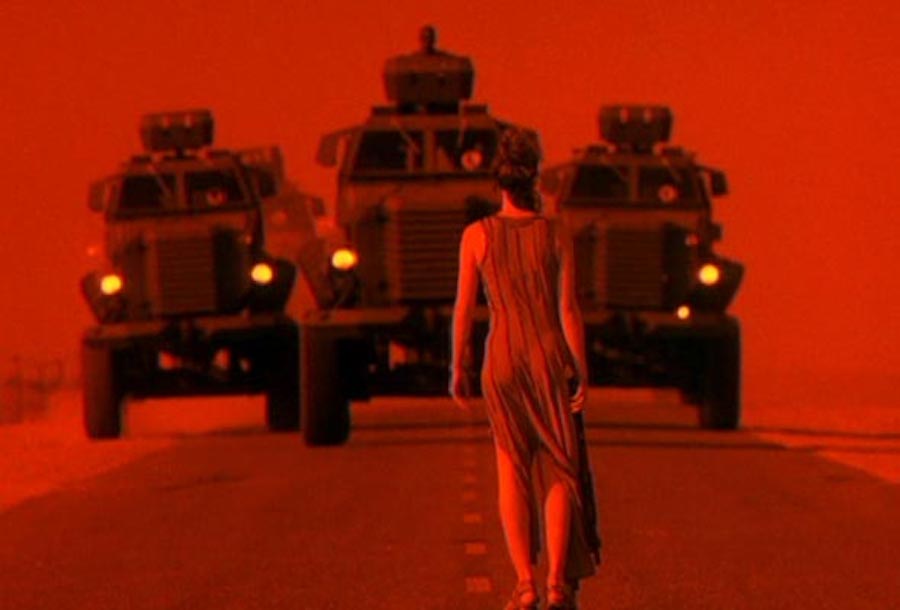 Written for The Film Talk:

If the trick to being a good troublemaker is to lob your brick and promptly vanish, then Richard Stanley fits the pattern, a troublemaker from the Fortean end of the spectrum who made his two recognised feature films before 1993 and has found other fish to fry ever since. But this does leave one of them, a singular piece of semi-fictional psycho-geography, to stand in splendid isolation.

Hardware isn’t it. That film has a decent stab at dystopia in sets that look as big as a closet, having blown a chunk of the budget on hiring the Roundhouse for the climax; but the very British flavour of late-1980s performance has curdled a bit. William Hootkins delves deep enough into sleazebaggery playing a voyeuristic pervert that you expect his sweat to start pooling on your carpet, but he and the other supporting cast do some anarcho-panto that wouldn’t be out of place in BBC’s The Young Ones. The tone of the UK comic 2000AD is clear too, even before the comic’s lawyers began an argument over the story’s origins.

What does work, and signpost Stanley’s bigger project, is the conspicuous sub-text. Stuck in a land of sterilisation and birth control, restless artist Jill, played by Stacey Travis as a ballsy flame-haired Final Girl, builds a surrogate child out of black market junk and gets an uncontrollable killobot for her troubles. She builds the thing via montage, with the beast watching endless violence on television while Jill gifts him a body and paints it with the Stars And Stripes. Weaned on war crimes and punk rock, the kid duly goes after his mom with a phallic drill bit very close to the one seen heading for Julie Christie in Demon Seed.

Close, but no Freudian cigar. Dust Devil though is the real thing. The best kind of horror film, in that it’s a sprawling, political, metaphysical fable cooked up by a production team who may have been stressed into delirium, it faces down any hint of self-parody and delves into psycho-geography instead. Technically it’s about a shape-shifting hitch-hiking serial killer, played by Robert Burke in an outfit modelled on both Sergio Leone and Stanley’s old comrades in the band Fields of the Nephilim, who murders young women and then does very unpleasant things to them afterward. But the film is really about its setting, the Namibia/South Africa border in the early 1990s, where some strange and powerful magic is stirring. Sorcery envelops everyone, but especially the rootless and significantly-named Wendy, played by a convincingly frazzled Chelsea Field. As wired and paranoid as any white South African of the time, Wendy falls into the arms of her particularly lost boy in a suicidal swoon, the two of them dancing to Hank Williams’ “Ramblin’ Man” while the Earth shifts under them.

The second-best thing about Dust Devil is this social dimension, that Stanley frets away at patiently while the serial killer has his fun. Only Clive Barker, another fine troublemaker, has this knack in this genre to the same extent. (And Barker’s last film as director before he too tired of the struggle, Lord of Illusions, post-dates Dust Devil by only a few years and shares a producer and a composer. They make a fine double bill.) Dust Devil’s feeling for the land of its birth, for desert and ruin and isolation, is right up there with Witchfinder General‘s empathy for English evergreens. It shows a whole country swimming up through the last throes of a nightmare and apparently calling up a demon in the process, with everyone caught at the moment that the fever breaks.

The best thing about Dust Devil is two of those people, a shaman named Joe played by John Matshikiza, and the cop Ben played by Zakes Mokae; two actors not demeaned in the slightest by the film’s wild mix of social witchcraft, playing two characters long since battered into shreds. The social document of these two South African performers playing out this story, both of them as freighted with past experiences as the characters they portray and both now gone, is not short of power. Mokae’s voice sounds like creaking shelves of history books. Dust Devil’s delirium finally crests when poor tormented Ben gets an inkling that he just might be a character in someone else’s film. Hypnotised by a vision of his wife as the Black Madonna, he lurches sideways out of his own movie in a flurry of sprocket holes, briefly rising into some other and more real reality in a gnostic flicker. Free at last.

Tough to top that. And barring the disastrous miseries of Stanley’s attempt to film The Island of Dr Moreau, he hasn’t tried. Instead he returned to documentaries, having said in the past that non-fiction anthropologies were his route into fictional works in progress, the notebooks of the mind. And if ever there was a convincing argument that the best documentarians are indeed anthropologists, Richard Stanley makes it. All his documentaries are worth the effort, but the spiciest is The Secret Glory about the life of Obersturmführer Otto Rain, a febrile tale of Nazism, mountains of crystal in the Tyrolean Alps, and the Holy Grail being carved out of a meteorite, whose factual accuracy may hardly be the point. Made in 2000 it fits neatly into the millennial vibe of the moment, while also looking askance at puckish fictions such as Grant Morrison’s The Invisibles and even backwards towards Illuminatus!. In the version of the film in the Subversive Cinema Dust Devil set, it’s tricky to spot where limited resources stop and Stanley’s playful nature starts—he drops Jerry Goldsmith’s music from The Final Conflict onto the soundtrack, again facing down self-parody as deadpan as you like. Watched today, it looks as if Stanley preempted a bunch of the expressionistic tactics now found gingering up the documentary form by a decade or so, and was ahead of the game in treating facts as just more data to play with.

The same year that Dust Devil received its five-disc box-set due, a nine-minute something called Sea of Perdition bearing the name of Richard Stanley bobbed up in the oceans of YouTube in two different versions. Its female astronaut is christened Sly Delta Honey—a sign for any Lucius Shepard readers that this particular wanderer probably isn’t exactly in the land of the living either—and stumbles around to John Barry’s “Flight into Space” music from Moonraker. Eventually a fish-man space traveller saunters off to the strains of Paul Williams singing “We Could Have Been Anything That We Wanted To Be” from Bugsy Malone. By any standards something of a doodle in the margins, it none the less looks a lot like a self-aware director, buffeted by some of the same forces that left Ken Russell making films in his own garage, creating a Martian temple and some shape-shifting Solaris-style manifestations down one end of a beach in Iceland out of allegiance to some older phantasms, Georges Méliès emerging from a floatation tank. More troublemaking like this, please.

(Some bits from the Dust Devil production diary here.)

Dust Devil diary To go with notes on Dust Devil here, bits from Richard Stanley’s production diary via the 2006 US Subversive Cinema DVD set, which is © him and