Some comics of the year: 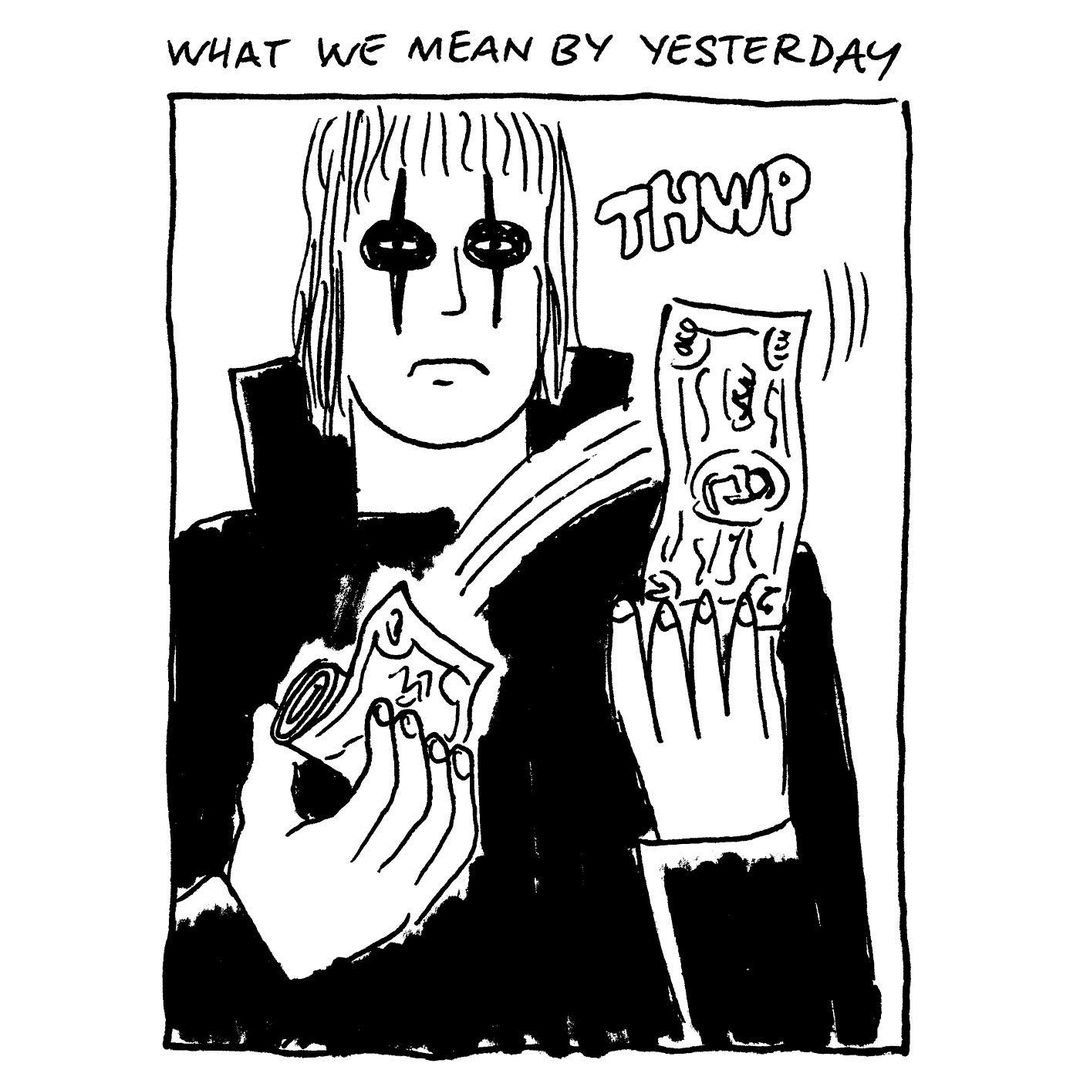 What We Mean By Yesterday by Benjamin Marra, who called it “Degrassi High on mescaline” but whose sympathetic skewering of America’s basic instincts lands him somewhere nearer an overlap of Charles Bukowski and Mark Twain. Exfoliating suburbia with a potato peeler, WWMBY has the added formal spice of arriving in daily portions on Instagram lasting presumably a calendar year, although the story could clearly roll on for a decade. (2021 Update: it rolls on.) Hapless teacher Bruce Barnes, a simmering ball of mid-life crisis likely to trip over a mop in exactly the way needed to make him land in a pool of piss, meanders into a psychodrama of sex and drugs and some of the whitest white people on the books. You could go on holiday and get back to find Barnes still attempting to extricate himself from the maladroit cock-up he made two weeks before. Or you could if holidays still existed—the strip’s slow-motion fever has ended up meshing with the time-dilated brainstorm of Covid-19 without Marra having to nudge things in that direction very hard. Peering behind the urban curtain to glimpse a raging cosmos, Marra took a 17-day 68-panel wordless digression into Barnes’s mind, where avatars and spirit animals tore chunks out of each other, and if David Lynch’s Twin Peaks Season 3 atom bomb had gone off in there it wouldn’t have been a complete surprise. 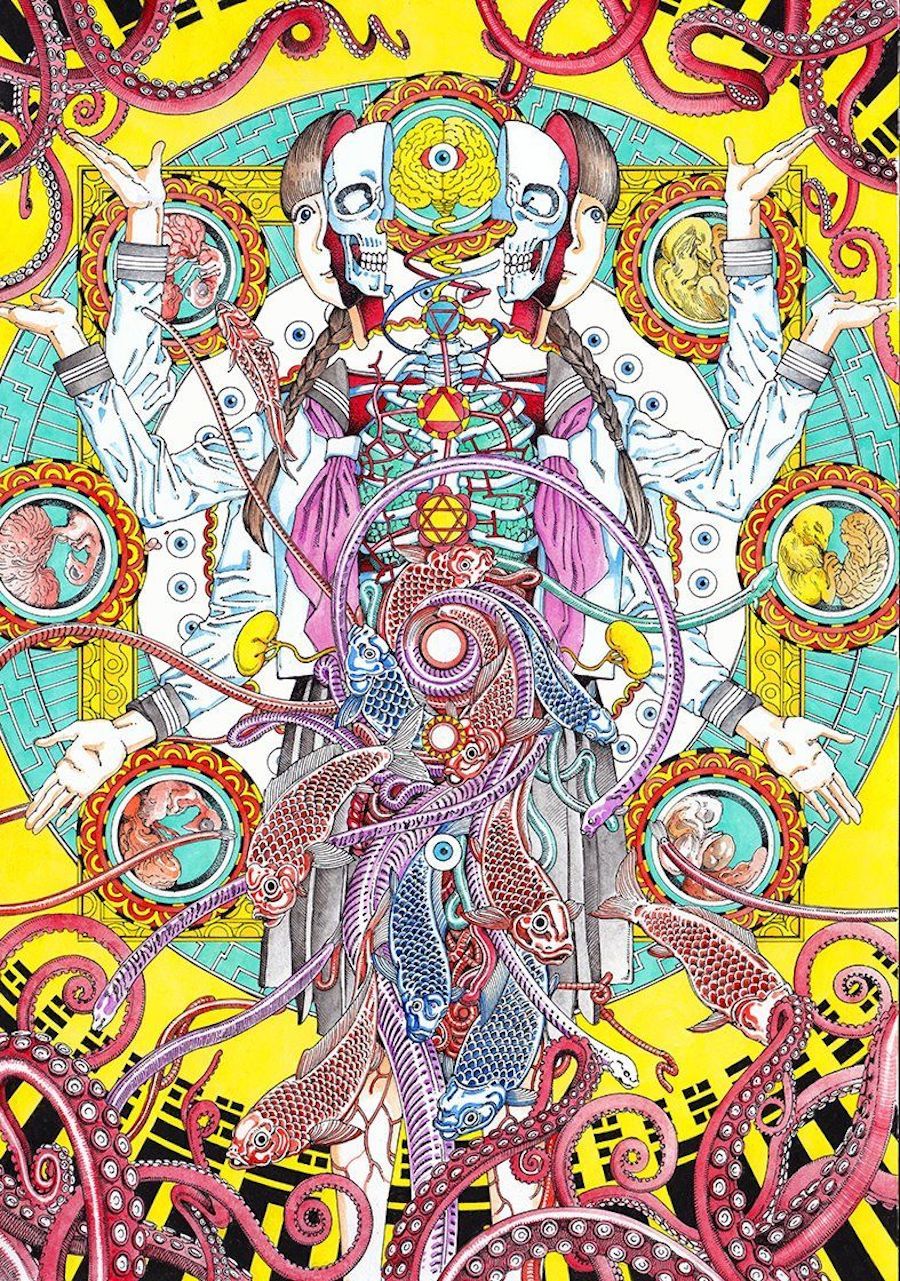 Coincidentally (or not) Shintaro Kago is also on a daily Instagram project, and Fantagraphics completed reissuing Dementia 21 this year too. But the tentative appearances of Kago’s comics in English had the effect of making his single images seem the place where the action is. A Japanese art book Shishi Ruirui turned up on cue collecting posters and covers and a lot else, full of Kago’s complete fascination with the human body and the culture that shapes it. Plus some impressively deadpan movie jokes: Enter The Dragon’s poster but Bruce Lee is holding two guys off the ground by the dicks instead of nunchaku sticks, Ikiru but the ropes of the sweet old man’s swing form nooses around the necks of two kids hanging from the frame behind him; knockabout stuff. All those placidly unravelling human bodies could hardly be less rigid or armoured or solid, and since bodies which are those things have the air of fascism, refuting them as emphatically as this makes Kago’s art seem liberal to the core. 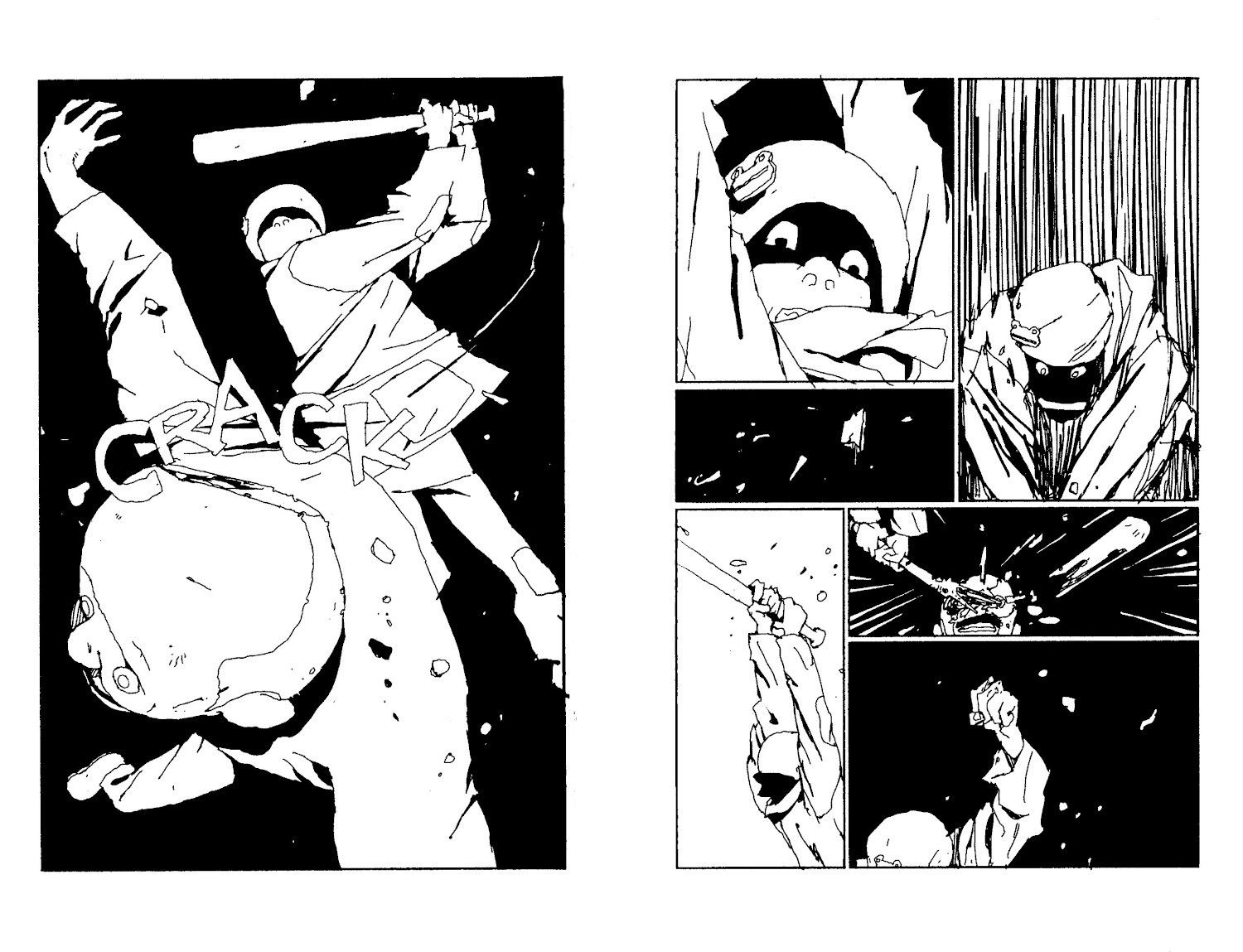 Gleem is by Freddy Carrasco and after now seeing four projects of his the upward curve of ambition and skill is unmistakable. Hot Summer Nights was a comic of stillness and heat with panels of Frank Miller motion dropped into the stream, and now Gleem is an anthology of fast motion with a Miller spread of ultraviolence revealed by the turn of a page. Carrasco is pulling in threads from all over US and Japanese comics, forging them into something shaped around Afrofuturism with some of the greatest urban faces currently around. 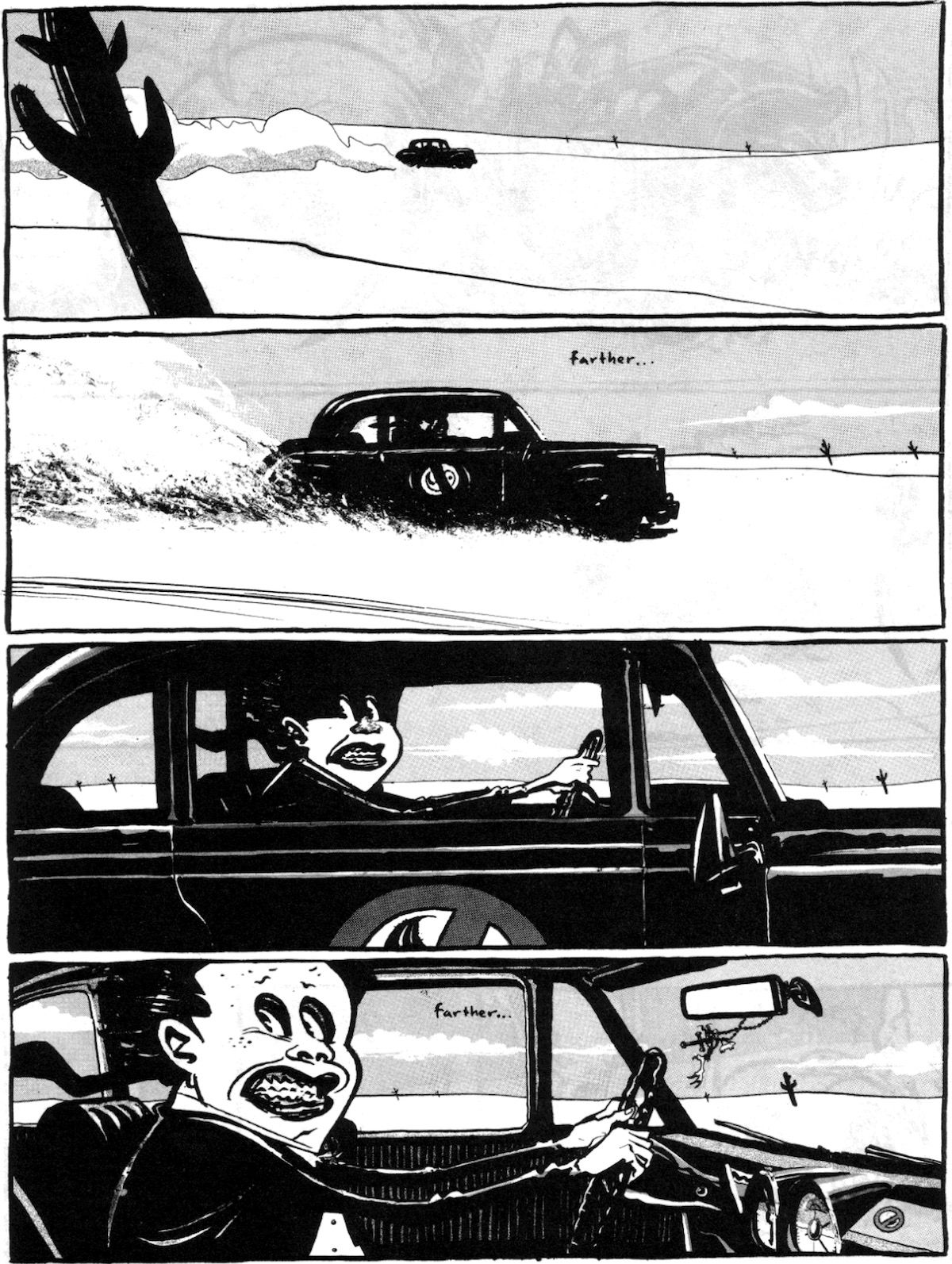 The Biologic Show rides again, although Hollow Press grabbed a tiger by the tail when they contacted Al Columbia about licensing it and might by now wish they hadn’t bothered. But a reprint of The Biologic Show in a single volume emerges from the war zone, speaking in the same coded language of nightmare it coined a quarter of a century ago. 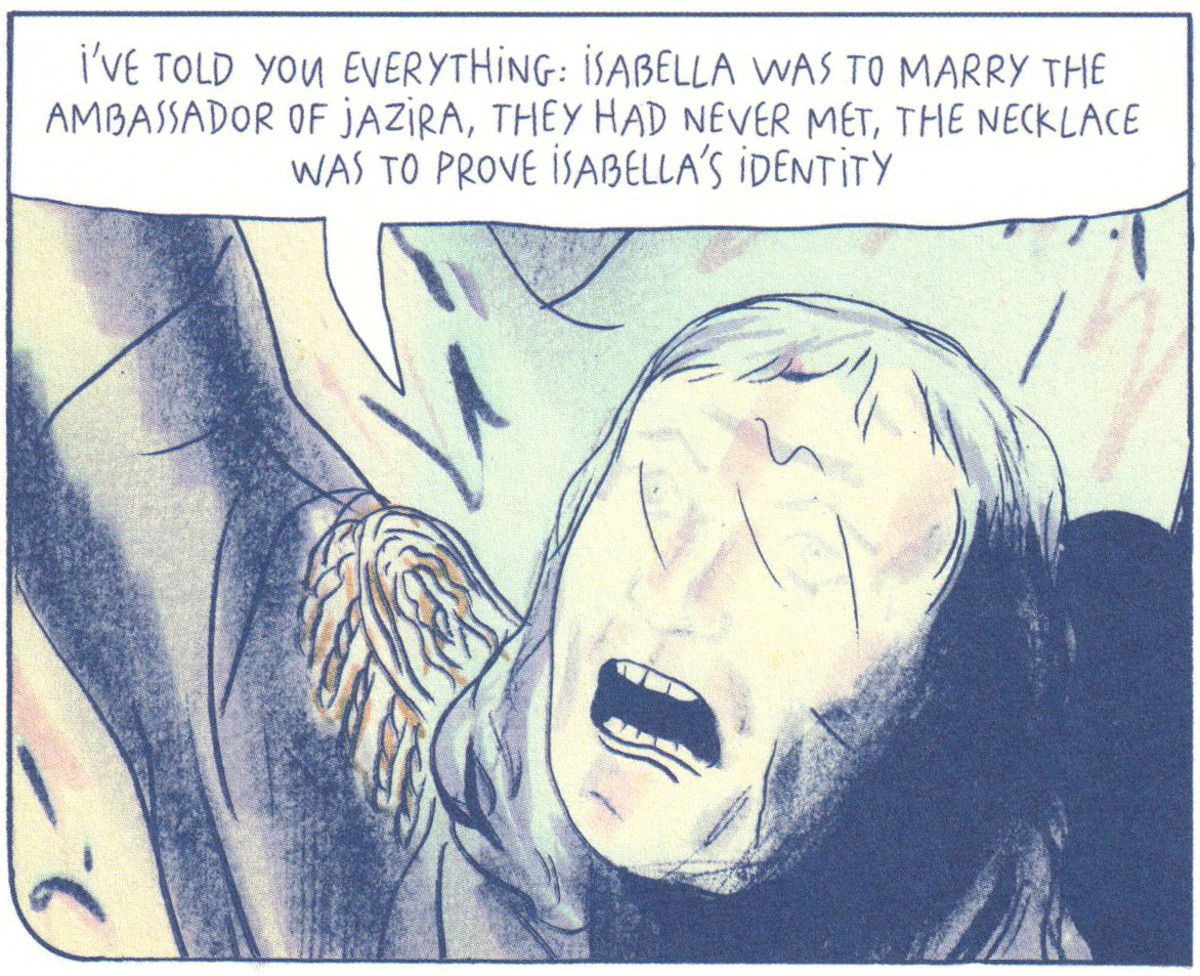 Portrait of a Drunk was discussed here but there are still fresh things in the art to notice: this guy being tortured with his features fading back into the paper of the page is the latest spot. 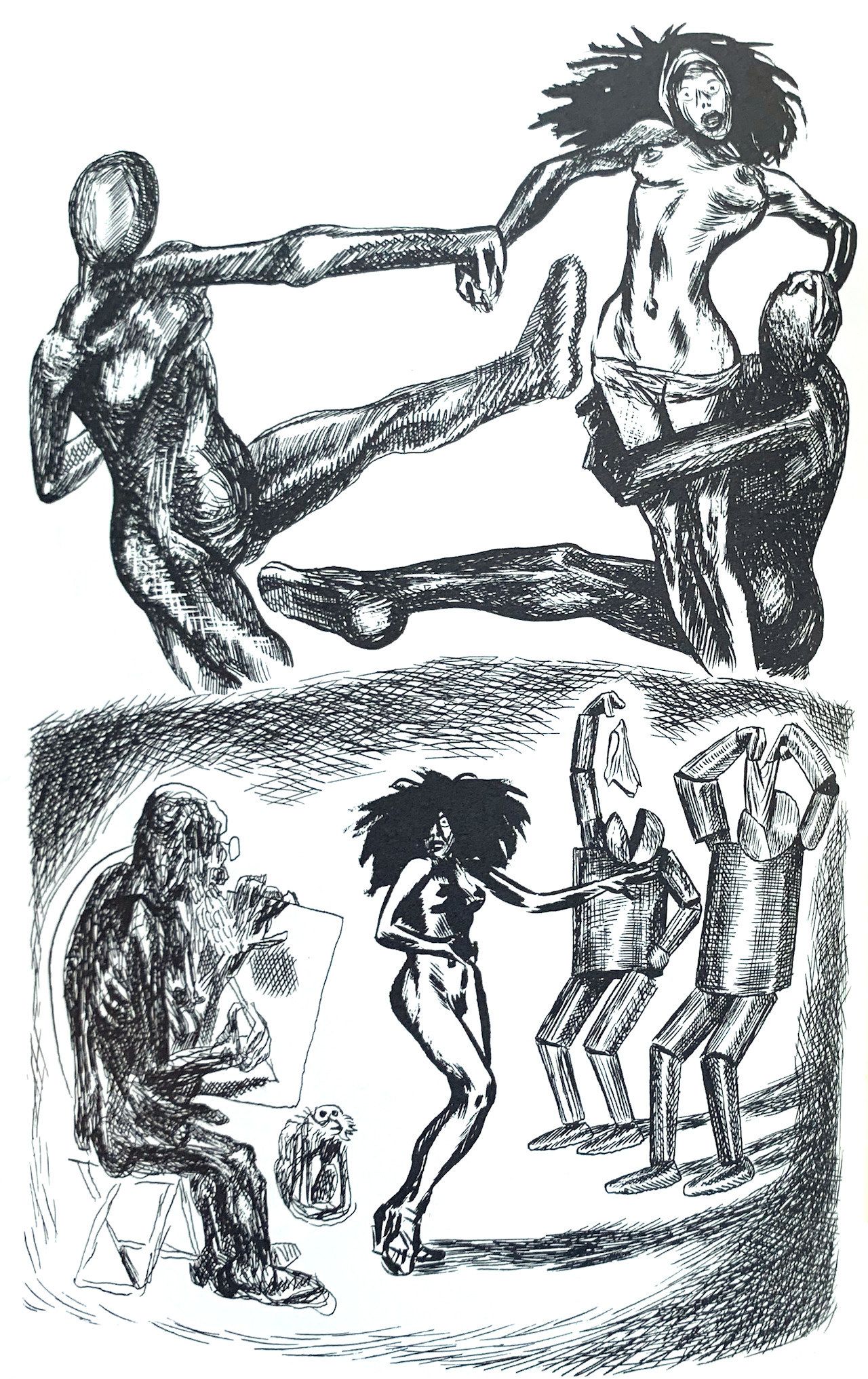 Mitchum reviewed by me for The Comics Journal. Another titanic work under zero illusions about human nature, which means it can’t help but be hopeful about the possibilities opening up even while it’s busy peering into the pit and seeing what men and women sometimes do to each other in there. 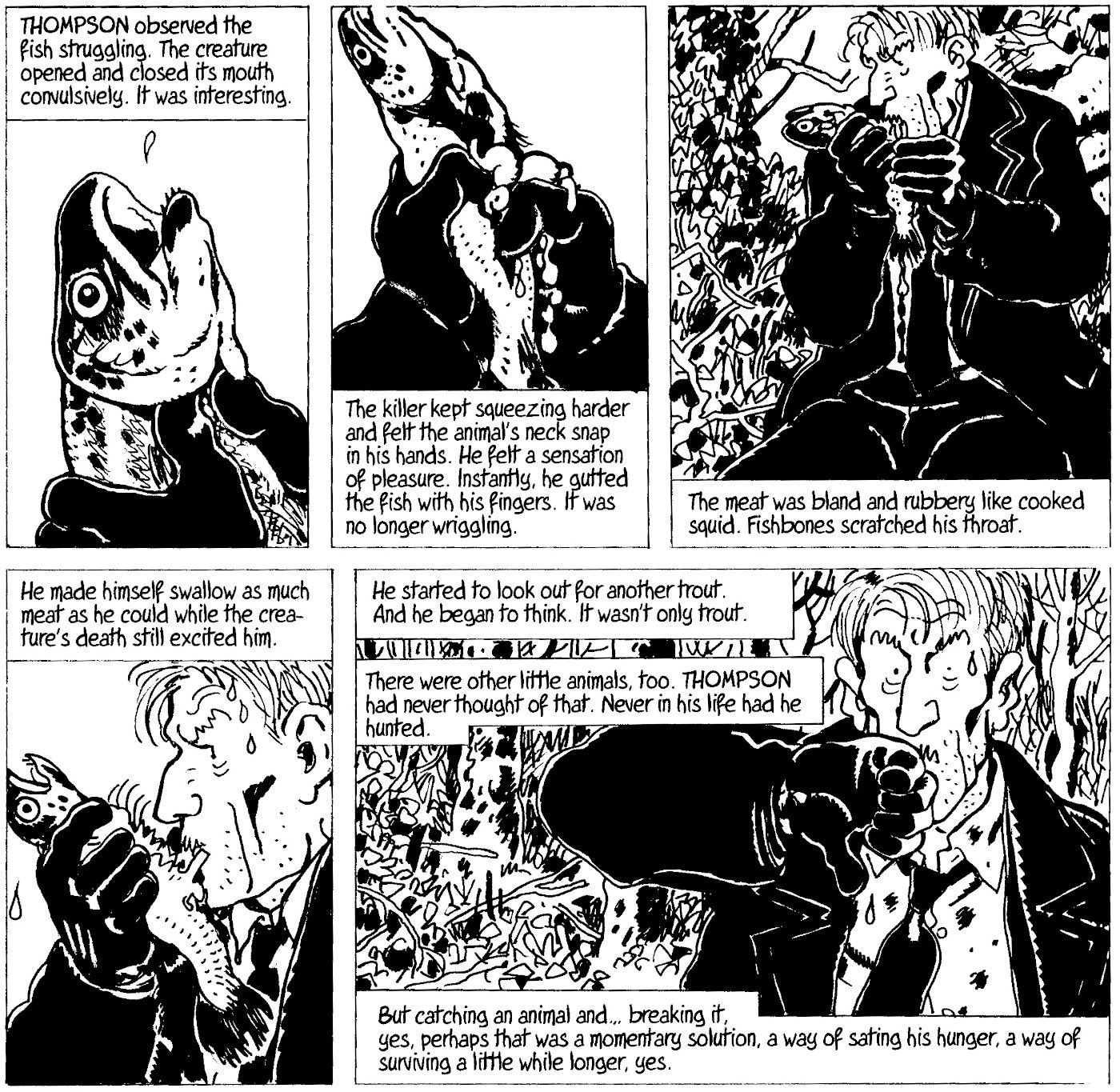 An unstoppable hitman devolving into something animal, or even more animal than he already was. The noir stories adapted by Jacques Tardi from Jean-Patrick Manchette novels along with some other unfinished stories and notes on their collaboration have been wrestled into two volumes by Fantagraphics and reissued. They sit on the shelf and glare threateningly at all the other books.